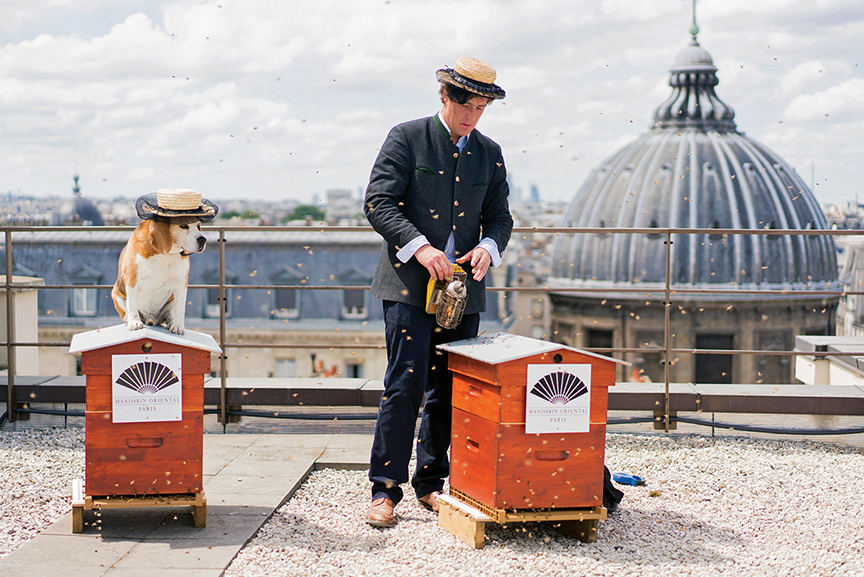 Some of the world’s finest hotels have accepted hundreds of thousands of new guests: honeybees that reflect a commitment to sustainability.

In an era when chefs and consumers are obsessed with conscientious sourcing and sustainability, restaurants are turning to local artisanal producers of cheeses, vegetables and meats. For a natural, sustainable sweetener that cannot get more local, luxury hotels around the world are converting rooftops into honeybee farms, a movement embraced by environmentalists and hotel guests alike.

Author Leslie Day, a naturalist who is passionate about her native New York, has spent a career documenting the city’s birds and trees. Her 2018 book Honeybee Hotel chronicles the rooftop garden and beekeeping operation at Midtown Manhattan’s Waldorf Astoria hotel. The book is a loving celebration of the iconic hotel, now undergoing a $2 billion renovation, and the natural world that doggedly prevails in the Big Apple.

Dr. Day — she holds a doctorate in science education from Columbia — was inspired by the Art Deco property’s conversion of its 20th floor rooftop into a bountiful garden and honeybee farm in 2012. The transformation not only enhanced the hotel’s culinary offerings, but brought together a community of humans to care for colonies totaling approximately 300,000 apis mellifera honeybees. Pleased to see other hotels emulating the Waldorf Astoria’s efforts, Day suggests, “This is a strong statement that a hotel cares about the environment and cares about the ingredients they serve their guests.” 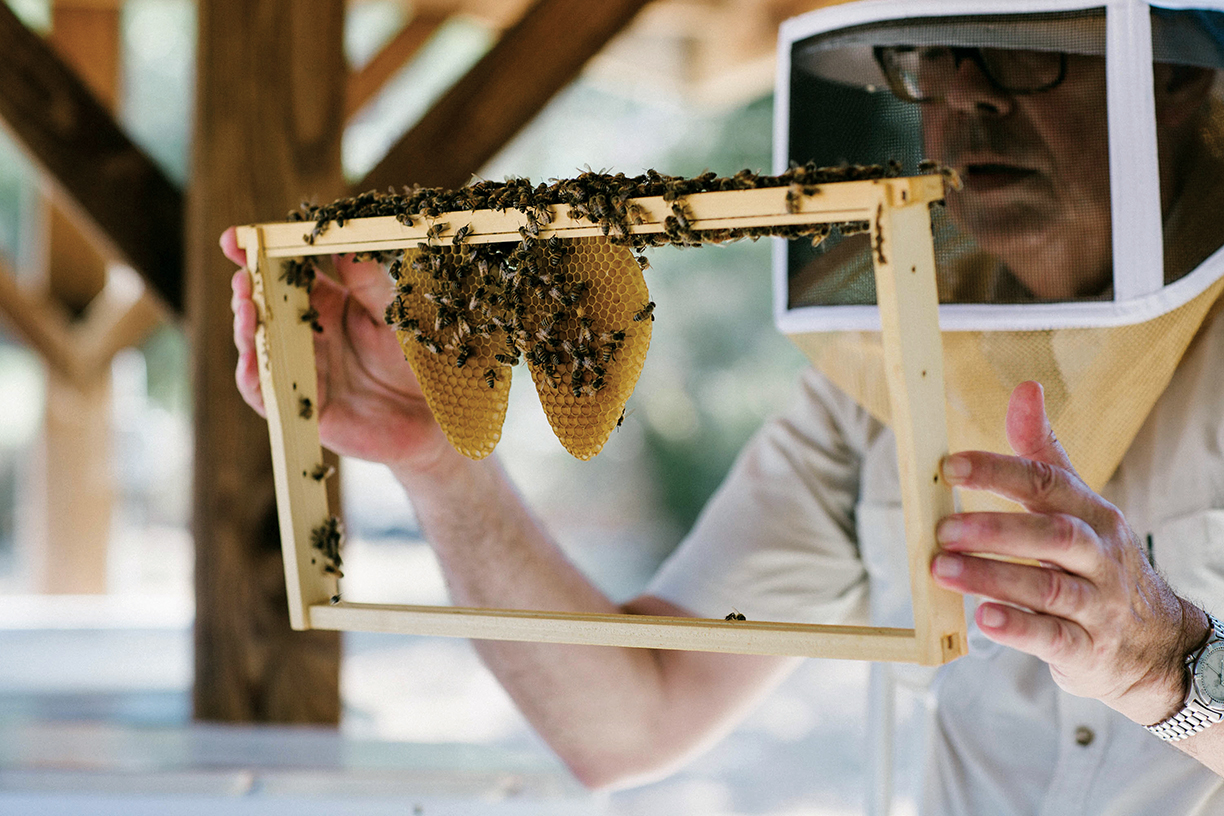 Day reports bees thrive in urban settings and notes even Manhattan is surprisingly hospitable to bees. “Before the chefs and staff put in the garden, the bees would fly to Central Park — about a beeline of a mile away from the Waldorf Astoria — to forage on flowering plants,” reports Day. “The city offers a veritable feast for pollinating animals,” she insists. A strong proponent of urban beekeeping, Day observes, “City beekeepers develop a relationship with these amazing little animals and help them stay healthy by monitoring the hive throughout the year.” She says of the challenging hobby, “It’s a relationship that brings you close to the natural world, even in an urban environment.”

David Garcelon, the chef Leslie Day features in Honeybee Hotel, arrived at the Waldorf Astoria after previously nurturing bees at the Fairmont Royal York in Toronto. His beekeeping at the Royal York, starting in 2008, was the genesis of a worldwide “Bee Sustainable” program adopted by more than 20 properties in the Fairmont Hotels & Resorts organization. Now hotel manager at Fairmont Banff Springs, Garcelon is attempting to overcome a restriction of introducing honeybees, a non-native species, into Canada’s Banff National Park.

“It’s not often you’re able to do something groundbreaking in a hotel over 100 years old,” recounts Garcelon of his bee program at the Waldorf Astoria. “There was a great deal of excitement when we added the hives, a lot of ‘buzz’ in the media as well,” he says. “However, the most rewarding aspect for me was seeing the look on guests’ faces when we told them we produced our own honey in Midtown Manhattan, then being able to take them to see the hives,” explains Garcelon, who appreciates any ingredient that has a story to tell.

Thanks in part to Fairmont’s aggressive program, the practice of hotels caring for honeybees is not confined to North America. In London, 350,000 bees reside on a third-floor garden at St. Ermin’s Hotel and in Paris, the very chic Mandarin Oriental — it is located on the fashion-forward Rue Saint-Honoré in the 1st arrondissement — has been honeybee-friendly since 2012. The honey produced by those Parisian bees is used in the hotel’s various restaurants and bars, including the Michelin two-starred Sur Mesure under the direction of chef Thierry Marx.

The Mandarin Oriental’s legendary beekeeper, Audric de Campeau (pictured with his companion on the rooftop of the hotel on page 26), has also introduced beehives to iconic Parisian monuments like Les Invalides and Musée d’Orsay. “Bees are an important part of the pollination cycle and often thrive in urban environments such as Paris, which has been a pesticide-free zone for the past ten years,” explains Mandarin Oriental’s general manager Philippe Leboeuf. To help restore the decreasing honeybee population and to contribute to biodiversity, the hotel maintains two rooftop hives hosting 100,000 Buckfast honeybees, a breed that adapts well to city life.

“Due to the specificity and the diversity of Parisian flowers, the Mandarin Oriental honey has a unique flavor, rich and complex,” reports de Campeau, describing it like a master sommelier. “It has a powerful and persistent scent of red fruits, and tastes wonderfully round in the mouth, with a bright, fresh finish,” he assesses. In addition to chef Marx and pastry chef Adrien Bozzolo, bartenders use the house honey in a cocktail of Champagne, yuzu liqueur and jasmine tea.

Most people outside the state are unaware of it, but Utah is known as the “Beehive State,” and the Waldorf Astoria Park City continues the practices of its flagship property in New York. Master beekeeper Debrah Carroll, who also serves as kitchen manager at the hotel’s Powder restaurant, maintains approximately 60,000 honeybees adjoining the onsite herb garden. Looking to become more sustainable in its food practices, the Waldorf Astoria initiated the program in 2014, complementing its emphasis on utilizing local ingredients. “The local sourcing is plentiful in our mountains, but we also wanted to have something, literally, from our own backyard,” explains Carroll, who concedes Utah’s dry climate presents challenges for beekeeping.

Carroll reports guests respond well to the uber-local honey, particularly when presented in the honeycomb. “The Waldorf Astoria honey has a wonderful wildflower flavor that works in various dishes and cocktails,” says the master beekeeper, citing seasonal fruit plates, salad dressings, candied pecans, and cheese or charcuterie boards, as well as a signature cocktail called the Astoria Tonic. VIP guests are treated to tours of the hives and garden, dressed in protective gear.

Dedicated to educating people on the virtues of beekeeping, Carroll reveals some extraordinary facts about honeybees that engender a greater appreciation for the house-made honey hotel guests drizzle into their tea. For instance, it takes 12 honeybees an entire lifetime (which is typically six to seven weeks) to generate a single teaspoon of honey, and in order to create a pound of honey, a hive of bees must travel 55,000 miles.

One might not expect 4,200 acres in the foothills of the Great Smoky Mountains to be a magnet for sophisticated epicureans, but Tennessee’s Blackberry Farm most certainly is. Almost everything that arrives on the dining table is produced on the premises, and that includes honey overseen by farmstead manager and beekeeper Dustin Busby, whose resume includes celebrated restaurants The Fat Duck and The French Laundry. He manages at least seven hives of European honeybees with access to tulip poplar, wildflowers and sourwood.

Most prized is the honey from sourwood tree blossoms, known for its sweet and spicy qualities, a hint of anise and agreeable aftertaste. Busby explains that factors such as time of harvest, weather conditions and even the specific portion of the hive from which the honey is extracted can influence taste. He is constantly developing new recipes for using the honey in the resort’s preserve kitchen and recently created a blueberry-elderflower jam using the house-made honey in place of sugar.

“Seeing the hives and talking about our bees are part of our garden and farmstead tours,” reports Busby. He adds, “More involved tours of the bees, including suiting up and looking at the hives or even collecting honey, are conducted from time to time on special request from guests.” Blackberry Farm honey is one of the many artisanal food products sold directly to hotel guests. Blackberry Farm raises virtually everything served at the resort, including house-made honey.

The Ojai Valley Inn is just 80 miles from downtown Los Angeles, but feels like another world. From its 220 acres in an idyllic coastal valley, guests enjoy access to the ocean and vineyards, as well as championship golf on site. The Farmhouse — this is a culinary event center directed by acclaimed chef Nancy Silverton — reflects the Inn’s commitment to food and wine. Guests who tour the retreat’s apiary in protective suits enjoy tastings of different honeys whose flavor profiles result from pollination of local plants like avocado, lavender and citrus.

“We’re extremely proud of our beekeeping program at Ojai Valley Inn, not only because it provides us with an amazing estate-curated product that we can offer our guests, but also because we believe strongly in good stewardship of the natural resources of the Ojai Valley,” reports executive chef Truman Jones. Emphasizing the positive ecological impacts yielded through the care of those prolific pollinators, he adds, “It gives us a huge return on our efforts by propagating the flowers and various fruits of the Inn and the entire Valley.”

In San Francisco, nearly a dozen hotels maintain rooftop beehives, including the Clift Royal Sonesta, which uses honey from its “Bee Sanctuary” in craft cocktails at its legendary Redwood Room. The Broadmoor in Colorado Springs, ranked among the world’s finest resorts, has also developed a strong apiculture program and Philadelphia’s Sofitel at Rittenhouse Square accommodates 480,000 honeybees on its rooftop garden, showcased in dishes at the hotel’s Liberté Lounge.

The beekeeping operations at these luxury hotels are an offshoot of an urban beekeeping movement that has become trendy in the last 20 years. The tasting notes of backyard honeys, sometimes sold at farmers markets and gourmet shops, mirror the flora of an area, even a specific neighborhood, much like a wine reflects its vineyard’s own terroir.

In addition to mesmerizing guests, keeping bees at hotels helps alleviate a crisis-level decline in the honeybee population that threatens entire ecosystems and adversely impacts food production for a hungry world. Master beekeeper Debrah Carroll reports that 80 percent of all flowering plants must be pollinated to survive, and that more than a third of the world’s food supply is dependent on pollination by insects like honeybees.

Addressing her nostalgic Waldorf Astoria, scheduled to reopen in 2022, naturalist Leslie Day comments, “I’m very hopeful the new management will read my book and bring the bees back.” 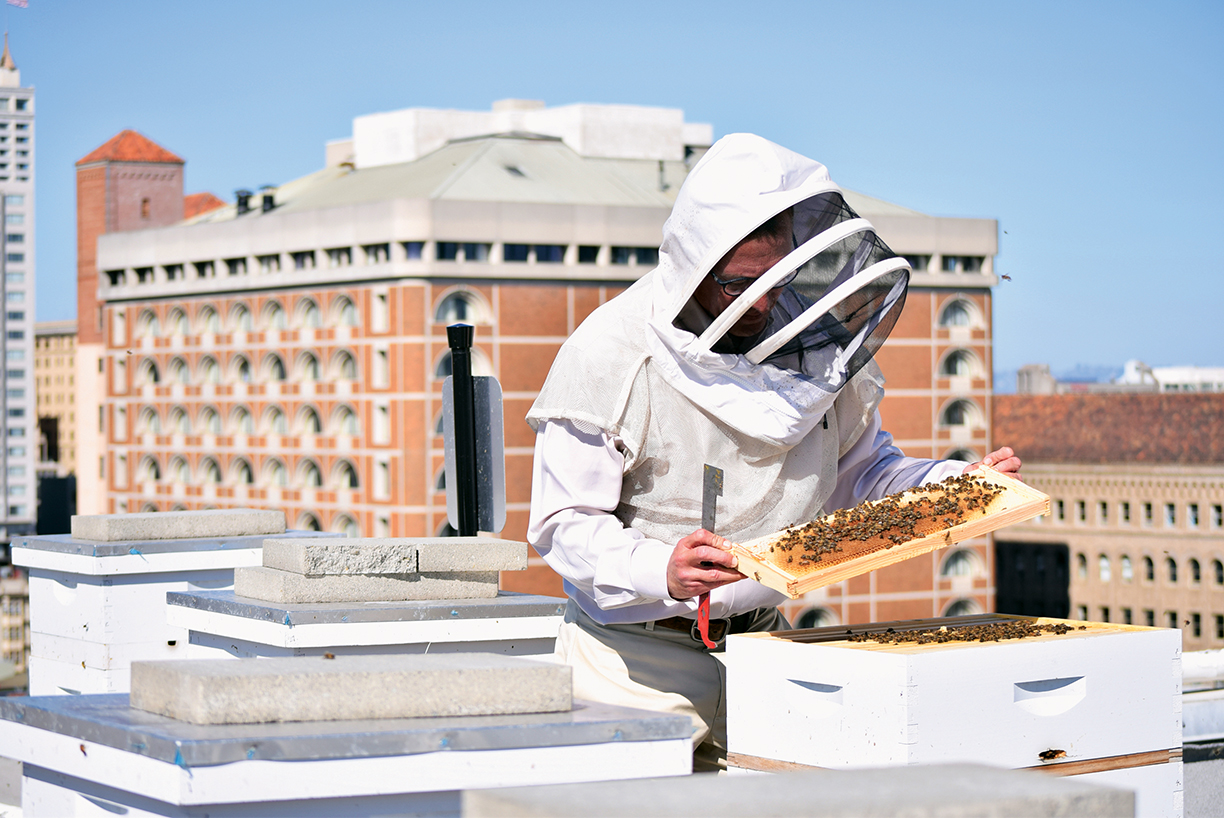 Honey from the rooftop of the Clift Royal Sonesta is incorporated into cocktails at the historic Redwood Room.