A closer look at distinguishing qualities between Scotch and Bourbon.

Throughout the world, there are several types of whisky, or whiskey; though among them all, Scotch and bourbon are two of the most beloved varieties. And while they do share some commonalities, their differences are immense, from the ingredients and flavor profiles to the distillation and aging process.

Contrary to popular belief, bourbon whiskey is not required to be distilled inside the state of Kentucky. It can, in fact, be made anywhere throughout the United States. Although, Kentucky makes an ideal location due to the state’s famous limestone water, which is rich in nutrients like magnesium and calcium that are optimal for distilling and aids in the fermentation process. Conversely, in order to bear the title Scotch whisky, the spirit must be produced, as well as bottled, within the country of Scotland. Across the nation are five distinguished whisky-producing regions; the Highlands and Islands, Lowlands, Speyside, Islay and Campbeltown, each delivering their own regional characteristics and unique flavors.

Speyside is by far the biggest whisky–producing region in Scotland with more than 50 distilleries, while Campbeltown is home to merely three.

To qualify as a bourbon whiskey, its mash bill must be made up of at least 51% corn, with the remainder comprising a mix of other cereal grains like malted barley, rye and wheat. The spirit must also be free from any additives, such as coloring or flavoring, as to maintain an authentic and unadulterated profile. In contrast, the primary ingredient in Scotch whisky is barley. Grain whisky can vary with a combination of ingredients like malted and unmalted barley, corn and wheat. 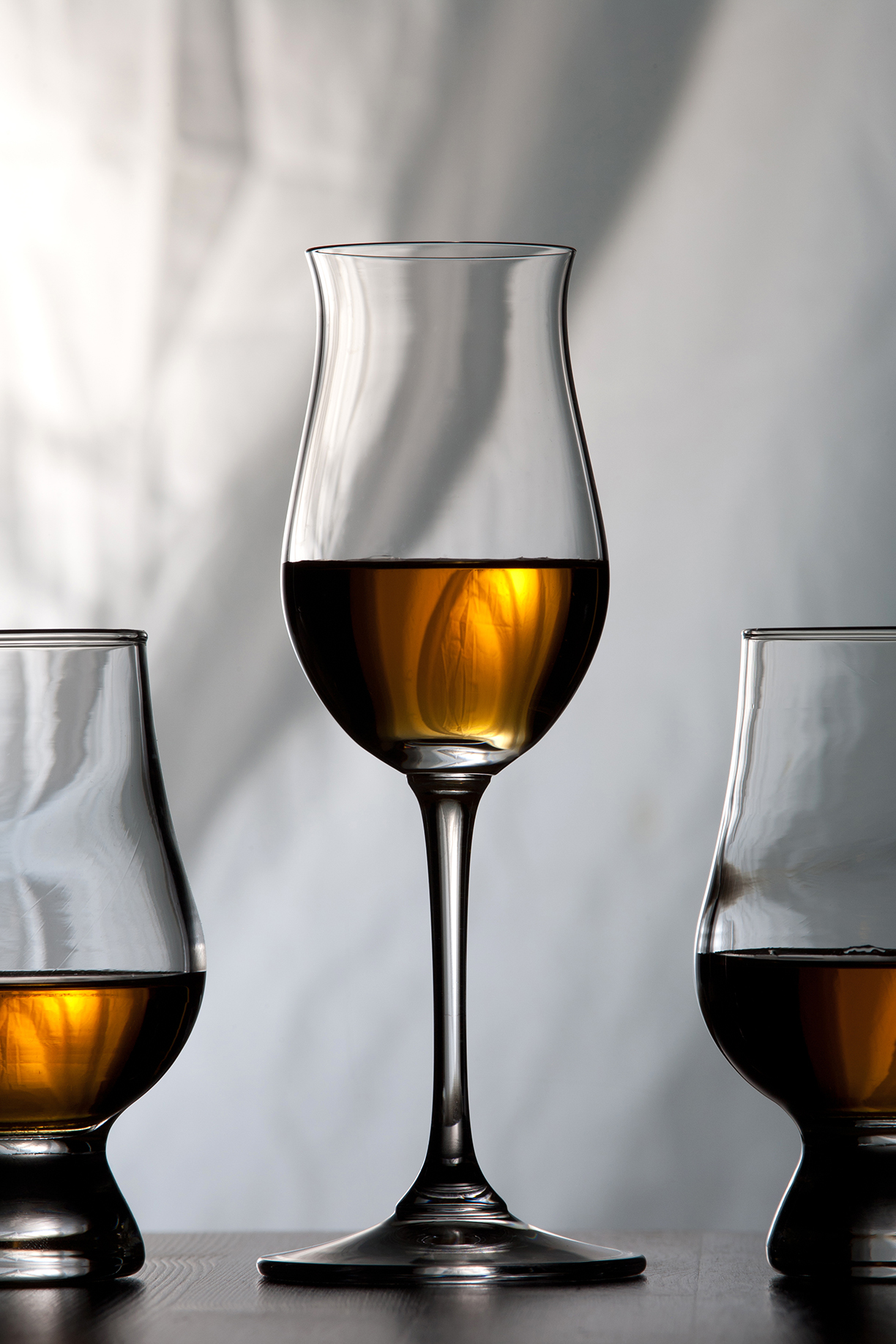 malt whisky, on the other hand, must be produced from 100% malted barley. Additionally, Scotch cannot be sweetened or contain any additives other than plain caramel for coloring.

In bourbon making, the mash bill will ferment for several days before being transferred into a column still with all the original grain solids remaining in the mixture. The resulting liquid, called distiller’s beer, is then boiled, vaporizing the alcohol through the top of the column and directing it into a doubler, where it is distilled once more to remove any further impurities.

The remnants and spent grain left behind in the column still, termed as sour mash, is sometimes reintroduced into the fermentation process to make sour mash bourbon, another variety of whiskey. While bourbon whiskey is allowed to be distilled up to 160 proof, the distillate must be reduced to 125 proof or lower prior to barreling, as required by law. Alternatively, in Scotch distillation, what is referred to as wort is separated from its spent barley grains before beginning its fermentation process.

After spending two to four days in containers called wash backs, the liquid produced during fermentation is distilled first in a wash still to boil off the alcohol from the water, yeast and pot ale. The remaining distillate, known as low wines, then passes into a second spirit still to be distilled another time. Before being barreled, the foreshots and feints of the whisky are both channeled off to be redistilled with the low wines in the next batch. Only the pure center cut, or heart of the run, which averages around 130 proof, is collected.

The alcohol that evaporates from a cask as the whisky is maturing in a warehouse.

A tall industrial still that uses steam injection and allows for continuous, mechanized distillation that produces a cleaner spirit than a pot still does.

A type of copper pot still commonly used in conjunction with a column still for the second round of distillation, especially for bourbon.

The more volatile compounds which distil off first during Scotch distillation.

The oilier compounds that are vaporized during Scotch distillation.

The mixture of grains used to make bourbon.

A compressed organic substance consisting of grasses, plants, tree roots and mosses that is used to dry malted barley and infuses a distinct peaty flavor.

A style of copper still that is most common in the distillation of single malt whisky.

The second, and often smaller, pot still used in the distillation of Scotch.

The first, and often larger, pot still used in the distillation of Scotch.

The spelling used by American and Irish distilleries.

The spelling used by Scotland, Canada, India, Japan and most of the rest of the world.

A warm and sugary solution that contains the soluble sugars from the malted barley dissolved in warm water.

Generally speaking, bourbon does not have a minimum aging require-ment, although, for a spirit to have the distinction of a ‘straight bourbon,’ it must be aged for at least two years. In addition, any bourbon aged less than four years must include an age statement on its label. Bourbon whiskey must also, by law, be aged in new charred oak barrels, which greatly contributes to the color characteristics and aging process.

This is a key difference in that Scotch distilleries have a large amount of freedom in choosing from a range of casks for which to age their spirits, including those which formerly contained wine, port, sherry and cognac, among others. This wide selection of vessels is part of tradition and allows distillers greater creative experimentation, having given rise to the method of finishing Scotch in secondary barrel; a common practice used today. And while several Scotch whiskies are aged for as many as 12, 15 and even 25 years, the minimum years for which a Scotch must be aged is three years.

Kentucky’s hotter climate results in more of the whiskey evaporating away as “the angel’s share” than is the case in Edinburgh, so aging a barrel of whiskey in Kentucky for 25 years pro- duces far less whiskey than would be the case in Scotland, and therefore a more rarefied product.

Bourbon’s high proportion of corn lends the spirit to have a sweeter flavor profile compared to that of many other whiskeys, especially Scotch. Without the elements of added flavors or coloring, much of a bourbon’s character relies heavily upon the charred surface of new oak barrels from which it often develops oaky, vanilla and caramel notes.

Scotch is much more complex and boasts a greater range of flavors than bourbon, given the wider cask selection, opportunity for blends and the age-old regions throughout Scotland renowned for flavors distinct to them. Whiskies that come from the Highlands and Speyside are better known for a lighter, fruitier and sweeter profile than that of a robust, smoky and peaty beast from Islay. The Lowlands often produce mellow drams with floral tones, and the peninsula of Campbeltown is noted for the dryness and sometimes pungency of its Scotch. 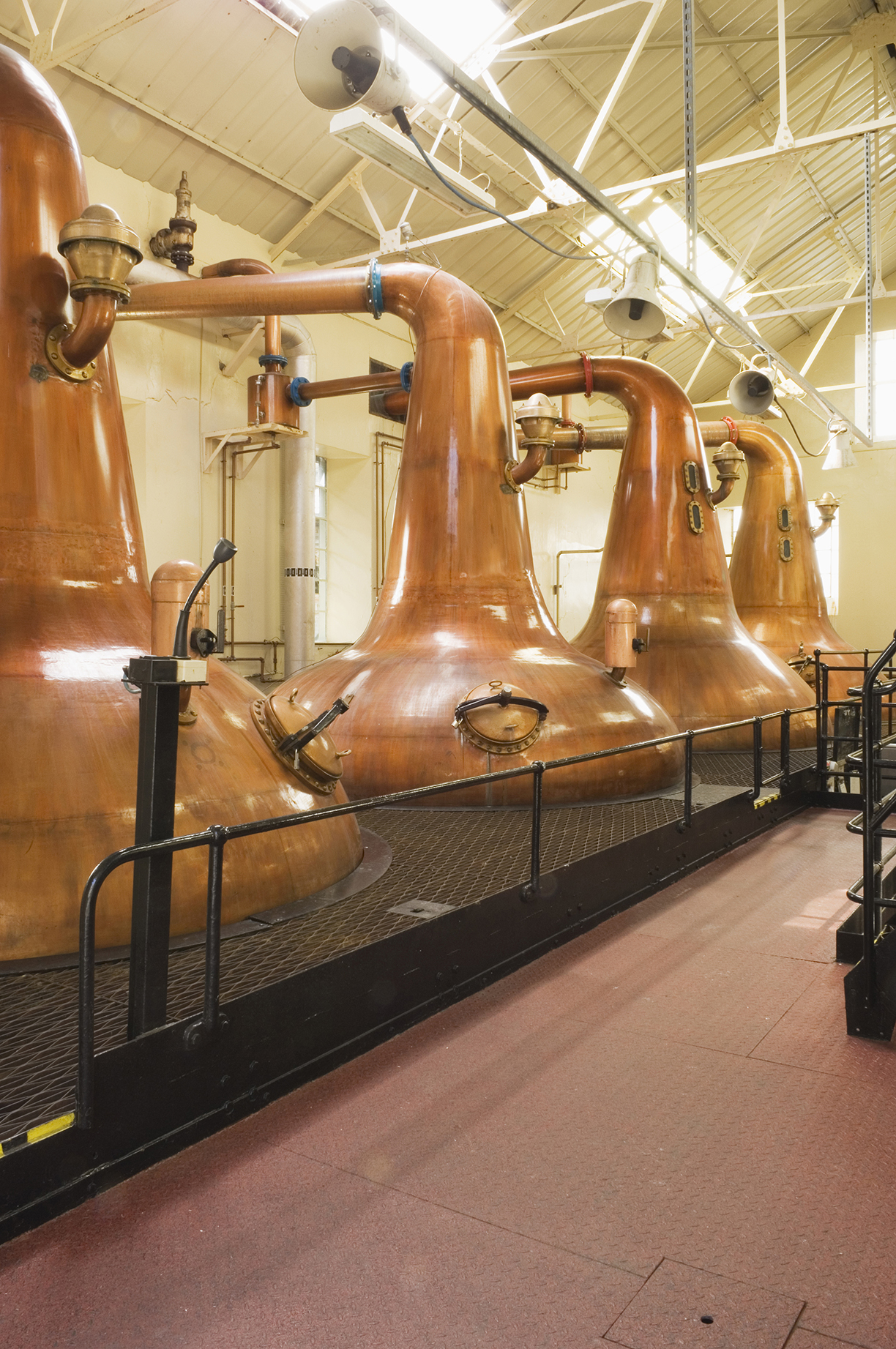 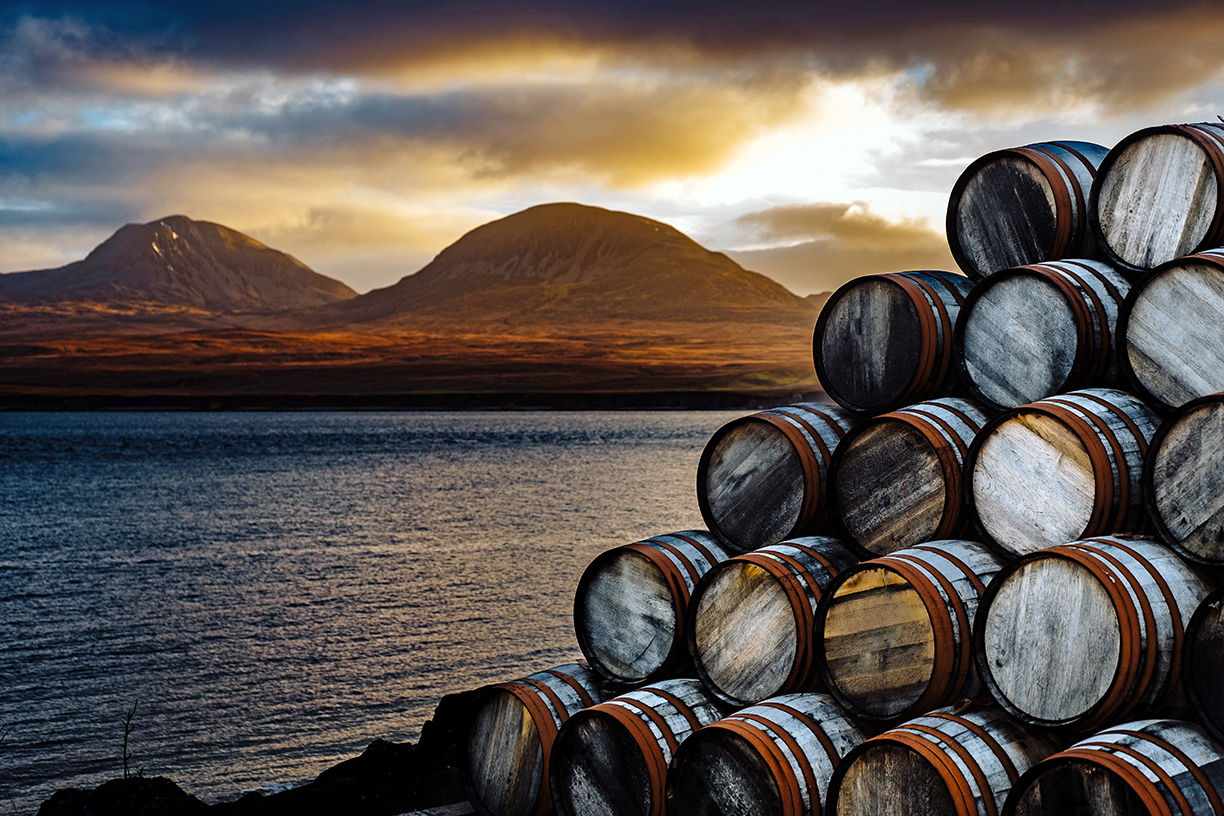