Whether working in busy urban studios or quiet countryside spaces, there’s no denying that makers and creators remain an integral part of Ireland’s culture and workforce. From painted canvas and chiseled stone to woven tapestries and hand-sewn clothing, the art of the handmade item is alive and well.

In fact, General Paints Group is telling the story of what it means to craft and create in Ireland in the only way it knows how: through color. The company’s new Curator collection features 144 unique paint colors developed and sourced from artists who focus their creative endeavors in Ireland. The palette presents everything from neutral hues that speak to the quiet woodlands of West Cork to bolder shades that evoke the country’s strength and spunk.

“From the very beginning, we wanted to make a collection that was authentic, special and genuine,” says Rachel O’Connor, expert director for General Paints Group and one of the developers of the Curator brand. “[The artists] all had colors that really meant something to them and inspired their work. And for a lot of their work, their muse was Ireland and our lovely landscape.”

O’Connor, who is also heading up Curator’s U.S. presence, says that develop-ing and sourcing the palette was a nearly ﬁve-year journey. After extensive searching, the team worked with 29 Irish designers and artisans to discover the history and heritage behind the colors that inspired them. Although the concept of the palette changed along the way, O’Connor says the goal of capturing “the passion they bring into their work” remained a driving force

O’Connor, who is part of the third generation of General Paints Group’s 65-year history, also points to her company’s own entrepreneurial spirit as part of the collection’s inspiration.

“We’ve always had an admiration for artists and craftspeople. Many are solo entrepreneurs who are doing what they love. We worked with a broad range of artists — potters, millers, sculptors — and although they’re all different, they had one thing in common, and that was color,” she says.

O’Connor speaks fondly of the stories within the pigment and describes some of the bolder colors in the palette. There’s Ancient Black, inspired from the creations of sculptor Ronnie Graham. O’Connor describes the lore of this deep, moody color as “haunting and mystical.”

“[Ronnie] works with what’s called buried oak — it’s oak that’s been buried in a bog for thousands and thousands of years. During the preservation process it turns a beautiful charcoal color,” O’Connor says. “Ronnie believes it emits a mystical power — and he tries to capture that in his sculptures. Interestingly, it’s been one of the most popular colors in our market.” 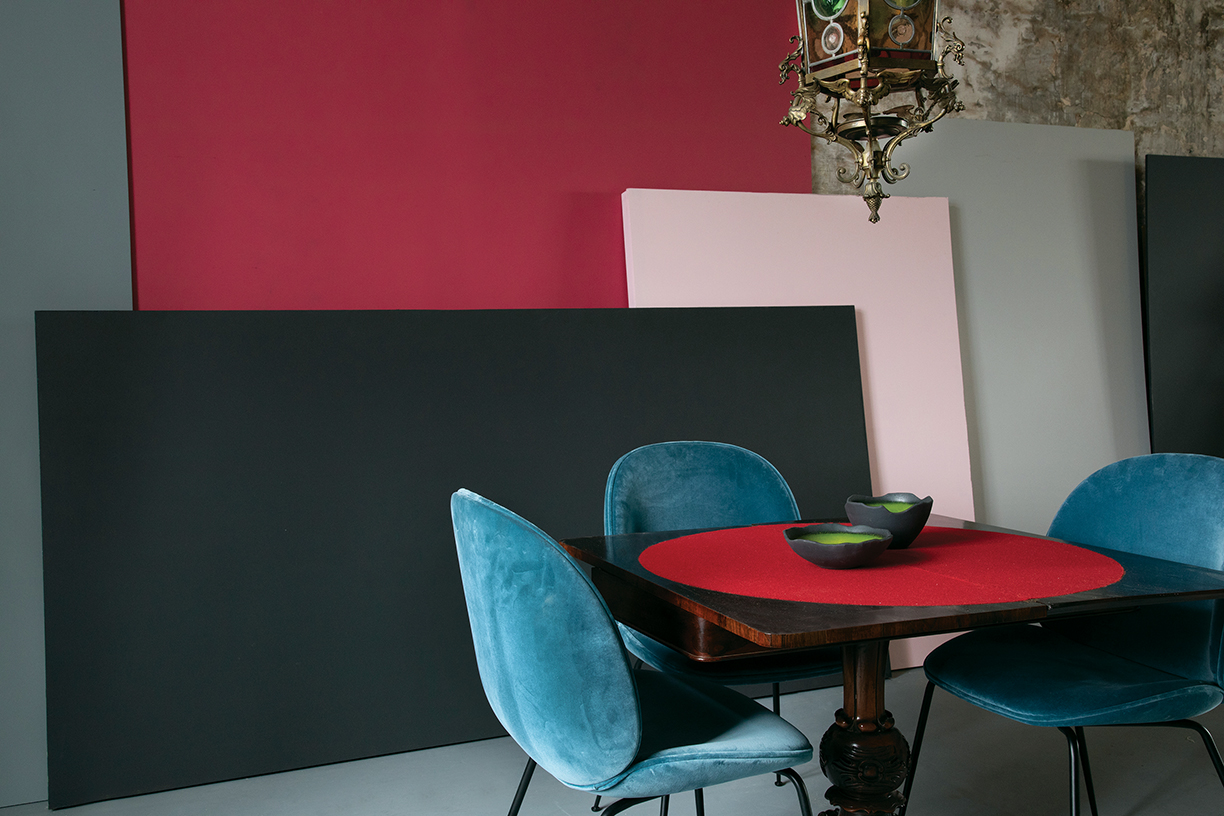 O’Connor also suggests the colors can be used seasonally — such as on flower boxes and planters, furniture or even doors; she describes charming Irish neighborhoods with bright pink, turquoise and other colors adorning the front doors of homes. “But we don’t like to be too prescriptive. There’s no such thing as a wrong color combination,” she adds.

Even the palette’s more traditional hues have a story that is anything but. Horseshoe, for example, is a stone-gray shade, aptly named for Horseshoe Mountain in County Sligo, Ireland, that inspires pottery artist John Ryan.

O’Connor’s personal favorite paint is also bright and bold: Running Tides, a bril-liant aquamarine unique to the seascape paintings of Irish artist Carol Cronin, who has captured the Atlantic Ocean on canvas for decades. (“You might think you could get bored of painting waves, but [her works] are stunning,” O’Connor says.) These brighter, livelier shades off er the “pop of color” that O’Connor sees throughout the commercial interior design market.

“People are starting to be less afraid of taking risks with pops of color. We’re seeing a lot of restaurants, hotels and public spaces take bolder risks. We think it’s a great trend,” she says. 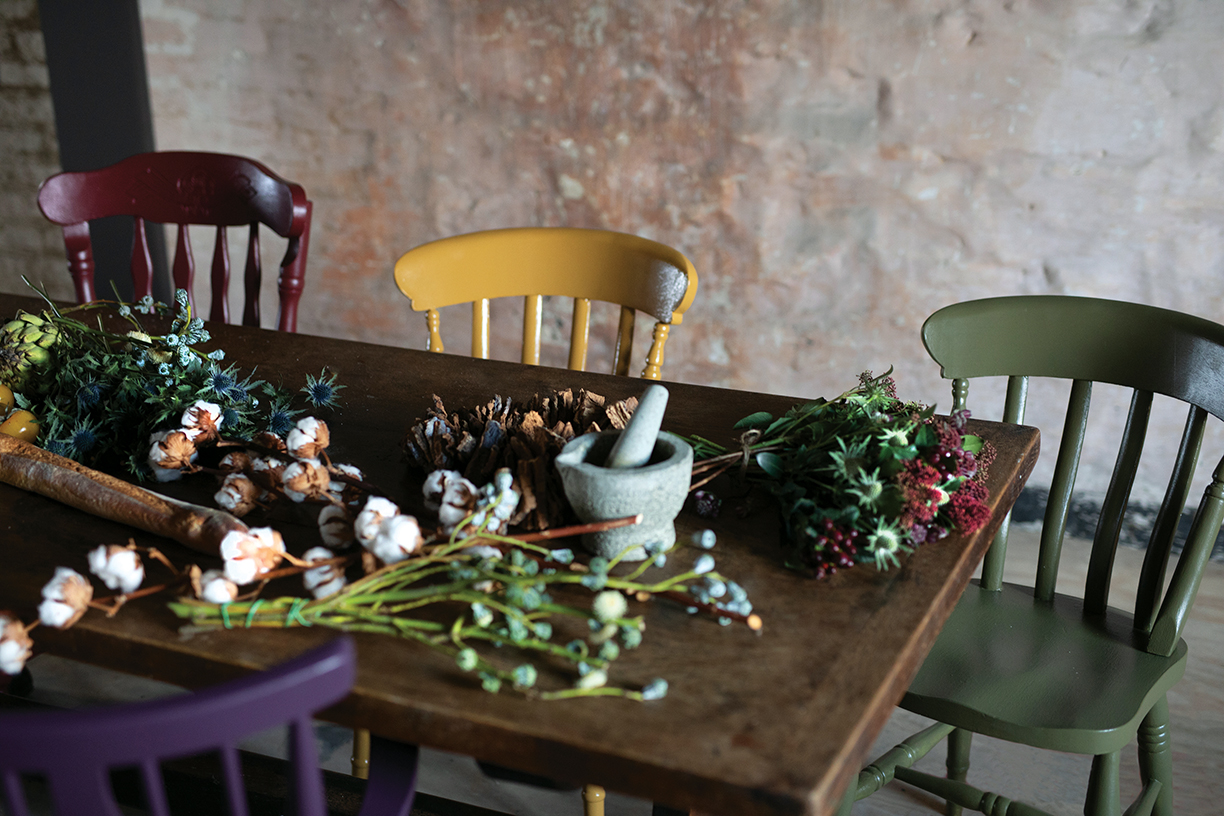 The collection boasts shades like Pulled Rhubarb, Tailored Tweed and Dried Kelp (painted on chairs left to right) that ad richness and depth to ordinary spaces.

“[Ryan] is immersed in the landscape surrounding his workshop, and it inspires these stunning creations,” O’Connor says of the potter’s handmade ceramics. “The color really shines through in his work.”

The collection made its U.S. debut ear-lier this spring in Connecticut and arrives on the West Coast in the fall, including southern California, Portland, Oregon; Scottsdale, Arizona; and Seattle. Ultimately, the collection aims to not only honor these artists, but to inspire others to use color to express creativity and passion, says O’Connor. And in a way, that allows the consumer to play curator and tell their own story.

“The collection [is a] showcase of Irish craft and talent, but it goes beyond that,” O’Connor explains. “I think home is deeply personal to people. You want it to reﬂect your identity and personal style. When you bring a color into your home, you’re looking for more than just paint. In our collection, every color has a meaning and personality. [It’s] allowing the customers to be their own curator.”

The collection is currently sold at Ring’s End as well as McDermott Paint & Wallpaper in Connecticut, and is also available for purchase at curator.com.

This post originally appeared in the Fall ’19 edition of The High End. 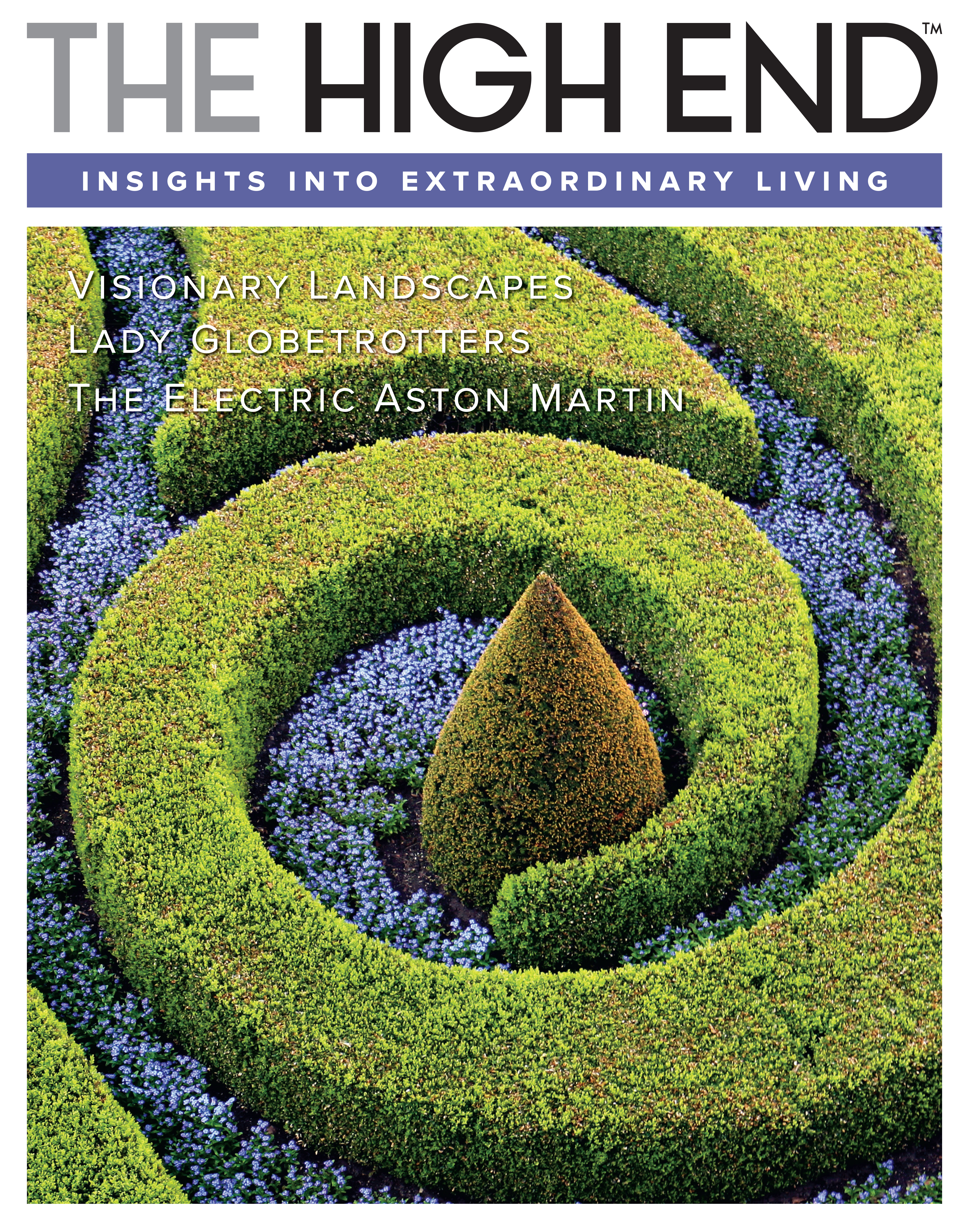 Designer Diane Durocher quoted “Adventure, curiosity and exploration are what opens young minds to infinite possibilities” as the inspiration for the boy’s bedroom in the home.
Read More

This warm and inviting 1918, Georgian-style home will great you with modern elegance. Architectural detail and classic style await the future homeowner.
Read More

Stunning Lake Michgian views await with this waterfront cottage featuring three florors of renovations and miles of beach along the lake.
Read More

The Real Estate Outlook for 2021: Join Us and Industry Leaders for a Free Session

On Feb. 2, Unique Homes presents a luxury real estate outlook unlike any other from our 50-year history.
Read More

The ASPIRE House Princeton series continues with the paradise-themed dining room! The room sweeps people off their feet to a tropical getaway.
Read More

This zen master suite is the perfect space to unwind or start the day, with an impressive master bath, spacious walk-in closet, and distinguished furnishings.
Read More

Live among the rare Bosphorpus mansions in Istanbul, Turkey in this seven-bedroom, four-bath Andonaki twin mansion (built in 1890).
Read More

Majestic Luxury Living in the Bahamas

With 170 feet of beachfront and a 98-foot private dock, this 5-bedroom, 6-bath estate home sits on 1.5 acres on the longest natural beach on the northeast shore in Nassau, Bahamas. The majestic home greets all with a grand circular, brick-paved driveway with an electric gate.
Read More

Majestic family estate on 18 acres in the gated equestrian addition of Qua Vadis in the Edmond city limits.
Read More

On Unique Homes' first exclusive virtual panel, real estate agents discussed how the real estate markets of America endured (and continue to endure) through the turbulence that the Covid-19 pandemic has caused.
Read More

This warm and inviting 1918, Georgian-style home will great you with modern elegance. Architectural detail and classic style await the future homeowner.
Read More

Stunning Lake Michgian views await with this waterfront cottage featuring three florors of renovations and miles of beach along the lake.
Read More

Live among the rare Bosphorpus mansions in Istanbul, Turkey in this seven-bedroom, four-bath Andonaki twin mansion (built in 1890).
Read More

Majestic Luxury Living in the Bahamas

With 170 feet of beachfront and a 98-foot private dock, this 5-bedroom, 6-bath estate home sits on 1.5 acres on the longest natural beach on the northeast shore in Nassau, Bahamas. The majestic home greets all with a grand circular, brick-paved driveway with an electric gate.
Read More

Majestic family estate on 18 acres in the gated equestrian addition of Qua Vadis in the Edmond city limits.
Read More

The home of famed McDonald's founder Ray Croc hits the market in California. The ranch features many luxurious amenities and space to entertain.
Read More

This exceptionally stylish and elegant home is in a private 6.8-acre wooded setting in Lewisburg, West Virginia, just minutes from downtown and the world-famous Greenbrier Resort.
Read More

Showcasing a greenhouse, waterfall and koi pond, this approximately 22-acre mountain retreat in the Greenbrier Sporting Club at White Sulphur Springs, West Virginia, is perfect for someone who enjoys nature.
Read More

Get ready to be swept off your feet. This sprawling 23,360-square-foot estate overlooking the 4th fairway of Las Vegas’ private TPC Golf Course is not your typical luxury home.
Read More

Inspired by Frank Lloyd Wright’s Falling Water, this legacy property located in the prestigious Enclave of Summerlin is perfect for entertaining guests and family.
Read More

A Cut Above The Rest

Sustainable jewelry companies weigh the impact of their creations, in more ways than one.
Read More

The color green symbolises life, renewal, harmony and growth and is set to steal the limelight of new interior design concepts in the year ahead.
Read More

Give the Gift of Sustainability

Ethical and sustainable jewelry companies are adding some sparkle to the world of fashion.
Read More

The delicate and fleeting beauty of nature has been preserved in Earth’s hardest natural substance resulting in the perfect combination of jewelry and flowers.
Read More

Sustainable Shoes and More by Nisolo

Nisolo, a sustainable fashion brand, shares its impact report online and offers everything from jewelry and accessories, to heels, boots, bags and more. This company focuses on more than low prices. The handcrafted process involves intentional designs, an ethical work environment, and comfortable fashion that can be worn every day.
Read More