Interest and research in driverless and self-parking cars is rapidly growing, as are ideas for how this technology may impact housing development.

The race is on among car manufacturers, tech companies and cities to develop reliable self-driving vehicles and required innovative infrastructure in what is being characterized as the third transportation revolution, one that possibly could have as dramatic of an impact as the automobile. Personal vehicles are only one facet of this future vision. Ride hailing services, shared ownership of cars, autonomous shuttles and buses, and self-driving trucks are all part of the scenario, along with Wi-Fi-enabled infrastructure and roadways that could charge cars.

To illustrate how dramatic the transformation might be, futurist Jack Uldrich uses two photos of Fifth Avenue in Manhattan. In a shot from 1900, horse-drawn vehicles fill the roadway. Thirteen years later, only one horse-drawn vehicle is in evidence, and cars and trucks take up the entire street.

“The transportation revolution will be a game changer for most real estate sectors” is the prediction of Green Street Advisors in a report, The Transportation Revolution: The impact of ride-hailing and driverless vehicles on real estate, prepared for the Urban Land Institute’s fall 2017 meeting.

“Most experts agree that the automobile as we know it will be largely obsolete by 2030. In its place will be fleets of driverless cars that shuttle people safely and efficiently through our city streets. But it’s the broader impacts of this technology that are a game-changer for the future of our cities and the human experience. The opportunity is not only to create new places that accommodate driverless cars, but to reshape our existing cities and towns into the kind of amenity-rich, vibrant places that we all enjoy,” observed architect Andy Cohen, co-CEO of Gensler.

Although a vast array of regulatory and legal challenges need to be addressed, consumer acceptance is considered most pivotal to the broader adaption of autonomous vehicles (AVs). Right now, few consumers have tried self-driving cars. Experts agree acceptance will only come with knowledge and experience.

One analogy often used to illustrate current apprehensions about new technology is the elevator, which initially was considered an incredibly risky innovation. “People didn’t want to get into it. Today, you and I don’t give a second thought to jumping on an elevator, and it whisks us up a hundred stories of a skyscraper. I think that same thing is going to happen with autonomous vehicles. We’re just soon going to get in a car, press a button and it’ll take us to our destinations without our thinking of it,” says Uldrich, who says the impact of the elevator also gives insight into the effect of technology on luxury real estate. “Before the elevator, wealthy people lived on the ground floor, and they made the servants walk up the stairs. But with the invention of the elevator, the penthouse then become the most desirable space. And so, technology sort of changed behavior in a curious way.”

“For consumers, the tipping point for large-scale adoption will come when not owning a car makes more financial and logistical sense than traditional ownership. Car enthusiasts, the affluent, and rural households will continue to own cars as AVs evolve,” explains Rich Palacios Jr., head of research for John Burns Consulting. Still, real estate agents in cities with high levels of congestion such as Boston or San Francisco are beginning to hear comments from high-end clients that they are planning to reduce the number of vehicles they own. 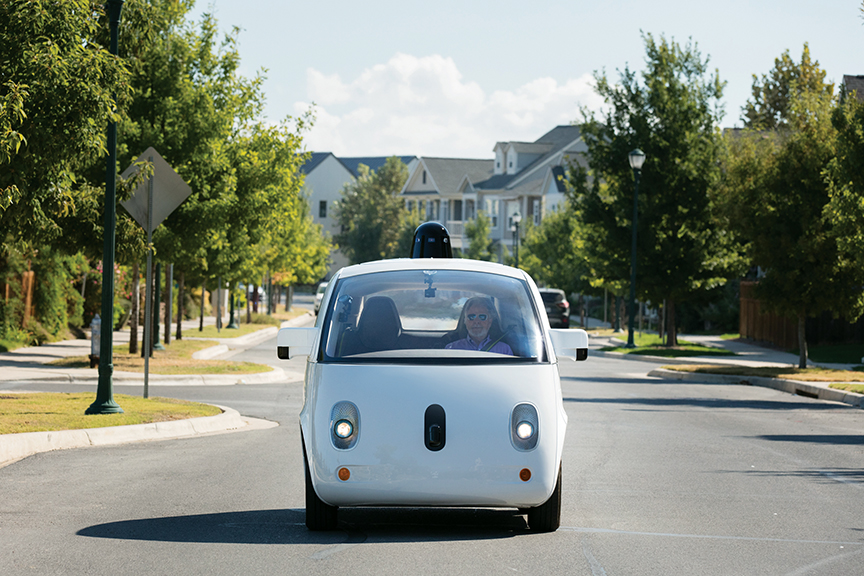 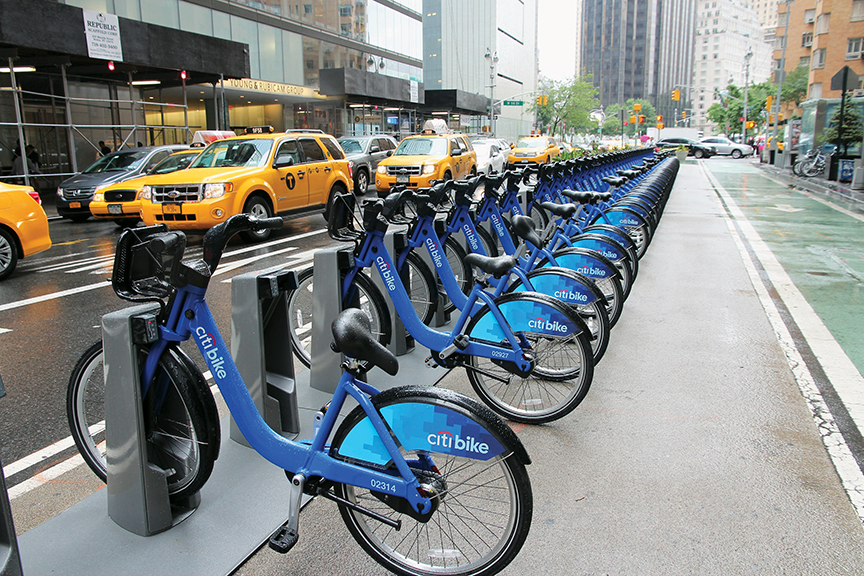 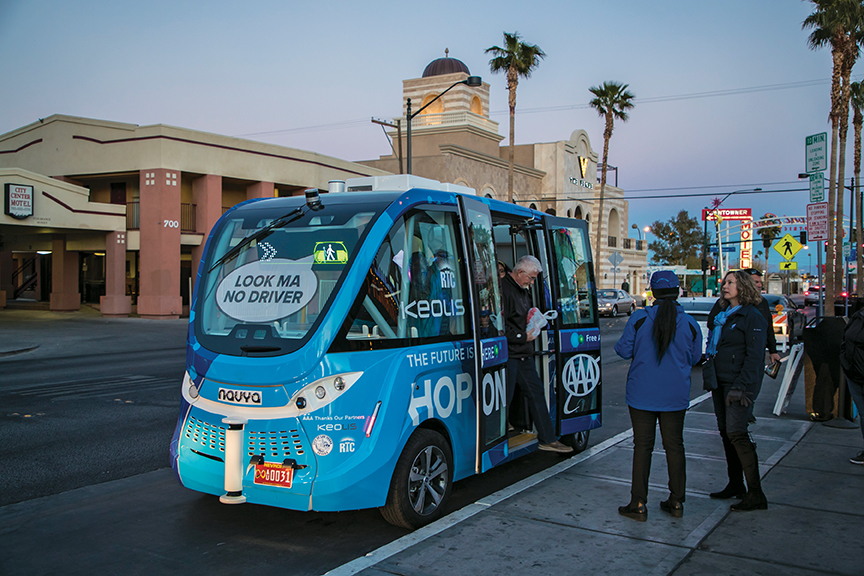 Even though many well-informed experts weigh in with varied opinions on potential transformations for real estate and housing, the only certainty is the change will be incremental, disruptive and far-reaching. “So, what impact will AVs and ride-sharing have on the housing market? We think a big one,” says Palacios. “A portion of the money once allotted to owning/renting a car should also free up for owning or renting a home.” As cars become more of a commodity, rather than a possession, costs such as fuel, maintenance and insurance will disappear along with loan/lease payments. “The boost to disposable income will be significant, once scaled,” says Palacios. Increases in productivity for individuals as well as industry are another expected result that will drive economic growth.

When the price of a parking space can exceed $300,000 or $400,000, even high-end consumers begin to examine the value of owning multiple vehicles. Conservative estimates suggest demand for parking could decline by 50 percent or more, freeing up extensive prime acreage. Already, in cities such as Chicago and Philadelphia, some former surface parking lots are being repurposed as mixed use or residential towers. Not only will the need for parking near prime buildings be eliminated, but overall, individual parking spaces will be smaller because autonomous vehicles do not require space to open and close doors when parked.

Some parking garages today are being designed with future adaptation to office or residential purposes in mind. Speaking at Trends 2018 sponsored by ULI Arizona, Veronica Siranosian, senior project manager with the global architecture and engineering planning firm AECOM Ventures, said they are recommending building new parking garages with flat floors and higher ceilings with the potential for HVAC and electrical.

Other changes she anticipates include mobility hubs that would incorporate bike share, drop off and pick up, automated shuttles and perhaps access to transit in one location. Additionally, building and street design will also have to consider added spaces for pick up and drop off.

Since most autonomous vehicles will be electric, the number of gas stations will also decline, further unlocking acres of what Palacios calls “prime real estate.” This reclaimed acreage will also improve the supply of homes in locations where inventories have historically been constrained, possibly dampening appreciation and enhancing affordability.

For a while, new construction in cities or close-in locations might impact interest in real estate in outlying suburbs, but in the long run demand for distant suburbs will reemerge as consumers realize they can use the time involved with longer commutes productively.

Overall, most expect to see a continued revival of cities. “What I am most excited about related to self-driving vehicles is society’s ability to envision better uses of the all-public space that is currently devoted to automobiles. In the future, I believe cities will have more green spaces, public parks, wider boulevards, and, perhaps, more affordable housing because we will be able to convert our garages and parking garages into fully functional living spaces,” says Uldrich.

“Get ready for more homes per acre, with the days of wide streets, massive driveways, and two-/three-car garages a thing of the past,” predicts Palacios. Higher density might be one potential outcome for residential real estate, but for consumers the result will be more livable square footage. While fully autonomous driving seems many years away, planners and developers are already rethinking how new development needs to be planned. “We’re already seeing apartment developers shifting to zero parking. Innovative master-planned communities such as Florida’s new Babcock Ranch (eventually home to 50,000 residents) are already utilizing AV community shuttles, with the goal of having on-demand AVs that individual residents can use via smart-phone apps,” says Palacios.

For current homeowners, unused garage space will offer a range of opportunities to add amenities or create new uses from live/work options to multigenerational spaces.

For an aging population, new transportation options will be a game changer with the potential to alter where and how they live. Most projections envision a growing number staying in their existing homes rather than moving to assisted living.

The transportation revolution also makes a bullish case for the repair and remodel industry, and adaptation of homes for aging in place is only part of the push for renovations. The conversion of garages will also boost this real estate sector.

Two years ago, the idea of self-driving cars seemed more like science fiction than a near-term possibility. Today, despite the first traffic fatality from an AV, the push to develop this technology remains strong. Major automakers including General Motors and Ford as well as Waymo (a unit of Google’s Alphabet), Lyft and others continue to actively pursue the technology for both cars and trucks. A majority of automakers are moving toward semi-autonomous vehicles. GM, for example, has added hands-free cruise control to their Cadillac line along with vehicle-to-vehicle (V2V) communication with similarly equipped vehicles that alerts drivers to disabled vehicles, sudden stops or a crash ahead. It’s also a good example of how autonomous vehicles will eventually communicate with one another as well as with infrastructure. GM recently petitioned the federal government to begin testing cars without steering wheels and pedals.

The National Transportation Safety Board defines five levels of vehicle autonomy. Current vehicles fall into levels 2AV and 3AV. One anticipated transition to fully autonomous vehicles at Level 5 is dedicated travel lanes enabling them to trail closer together and communicate with each other and infrastructure. Hypothetically, this scenario would facilitate the movement of traffic, but some experts hazard that AVs will only increase congestion.

California and Arizona are on the forefront of the transportation revolution, incubating new technologies including potential use without a driver in the car. In late January, Waymo got a permit to operate as a Transportation Network Company in Arizona, which allows Waymo’s fleet of driverless minivans to pick up and drop off paying riders through a smartphone app or website. Other states including Texas, Ohio and Michigan are also proactively working on AVs.