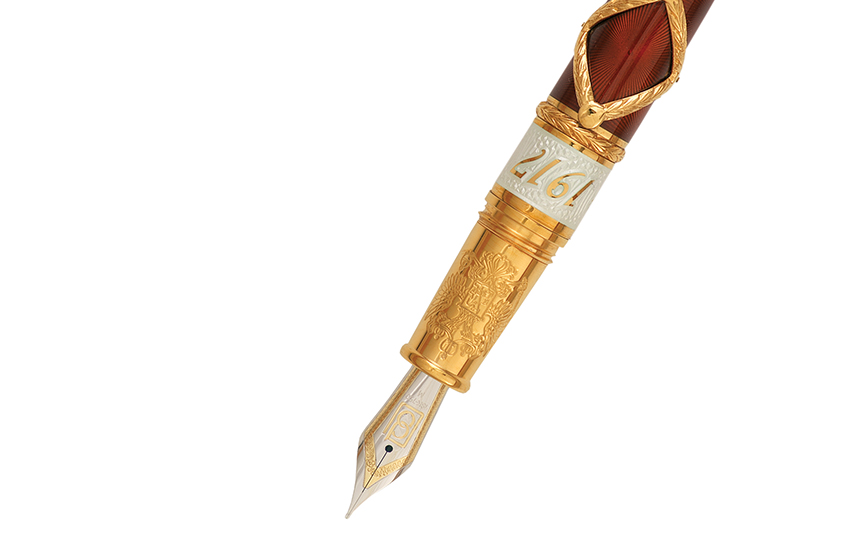 Writing a check or signing a document is generally a routine task, one far too often facilitated by an 89-cent piece of plastic and aluminum. But a bejeweled, limited edition writing instrument can transform a simple signature into a truly artistic expression.

Nancy Olson, a leading authority on fine writing instruments, reports, “Unlike many other luxury collectibles, a pen is portable, user-friendly and has a cultural element because of its link to writing and the arts.” Olson, who is also a prominent commentator on timepieces, notes the parallels between the two instruments, stating, “Pens and watches are both small, mechanical objects that provide a healthy hit of extravagance and enjoyment when worn or used.”

Among Olson’s favorite designers are German manufacturers Pelikan and Montblanc, the latter the high-end brand with the greatest mainstream name recognition. Montblanc pens have long been considered luxury items, but many are surprised to learn that some of the company’s limited edition writing instruments cost not hundreds, but hundreds of thousands, of dollars.

Montblanc collaborated with elite jeweler Van Cleef & Arpels on a $730,000 pen bejeweled with diamonds, rubies, emeralds, and sapphires to commemorate both companies’ 100th anniversaries in 2006. The manufacturer’s Meisterstück Solitaire Royal LeGrand fountain pen is copiously embellished with more than 4,600 diamonds and valued in excess of $200,000.

Olson reports the qualities collectors admire most in pens are craftsmanship, scarcity and the ability to convey a story.

The 1010 Timekeeper by Caran d’Ache celebrates the watchmakers that share the company’s hometown of Geneva.           Courtesy of Caran d’Ache.

Few brands have mastered storytelling better than St. Louis-based David Oscarson, whose eye-popping writing instruments encompass a remarkable diversity of themes. In addition to celebrating the natural world, art or architecture, Oscarson pens commemorate historic figures such as the Romanovs of Russia, Lewis & Clark and Sir Alexander Fleming, the bacteriologist who discovered penicillin. Most Oscarson issues are priced at about $5,900, but special editions command more than $250,000.

One David Oscarson pen — a blue and silver piece featuring the Star of David and the Three Crowns of Sweden — honors Raoul Wallenberg, the Swedish diplomat who harbored thousands of Jews during the Holocaust. The limited production of each theme often involves a bit of trivia, such as the 63 pens honoring Alfred Nobel (the philanthropist’s age when he died). For most David Oscarson pens, enamel is applied over metal manipulated through the painstaking technique of guilloché, an ornamentation process pioneered by Fabergé.

“There aren’t a lot of choices for gentlemen who like accessories,” states Oscarson. “Beyond wristwatches, there are very few pieces of men’s jewelry that are sustainable in style,” adds the industry veteran.

A one-of-a-kind special edition fountain pen from the company, crafted from solid 18-karat gold and encrusted with nearly 35 carats of white, yellow and caramel diamonds, has been offered on the resale market for $755,000.

“I judge a manufacturer by the quality of its pens and its creativity in putting a fresh face on what, in essence, is a very small canvas,” says pen commentator Olson. She cites Caran d’Ache’s 1010 Timekeeper, a limited edition that cleverly pays homage to the art of watchmaking, the industry that dominates the company’s hometown of Geneva. 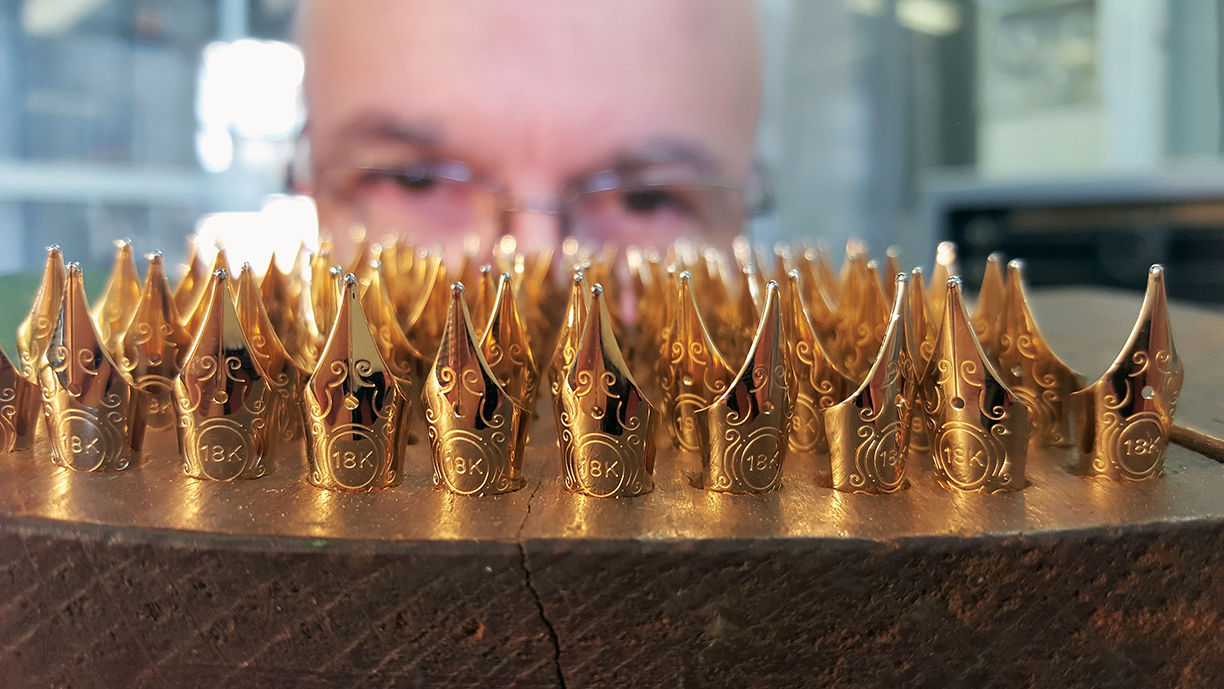 That fountain pen ($11,500) features a reinterpretation of the elements of a watch dial. Its silver- and rhodium-plated cap was inspired by watch strap design and a piston pump with a ruby accent is reminiscent of a watch’s winding crown. This model follows a 2008 limited edition of ten 18-karat gold 1010 pens, currently priced on the resale market at about $150,000.

Caran d’Ache also produced an 18-karat gold fountain pen — another piece valued in the hundreds of thousands of dollars — sheathed in more than 4,100 brilliant diamonds and accented by a band of 108 emeralds. This unique writing instrument, whose precious stones were set by Geneva jeweler Pierre-Yves Bonzon, took about six months to complete.

“The brand benefits from Swiss manufacturing traditions, whose exacting precision in watchmaking carries over to fine writing instruments,” says Hengesbaugh. Top: Italian manufacturer Aurora is renowned for its meticulous craftsmanship. Courtesy of Aurora. 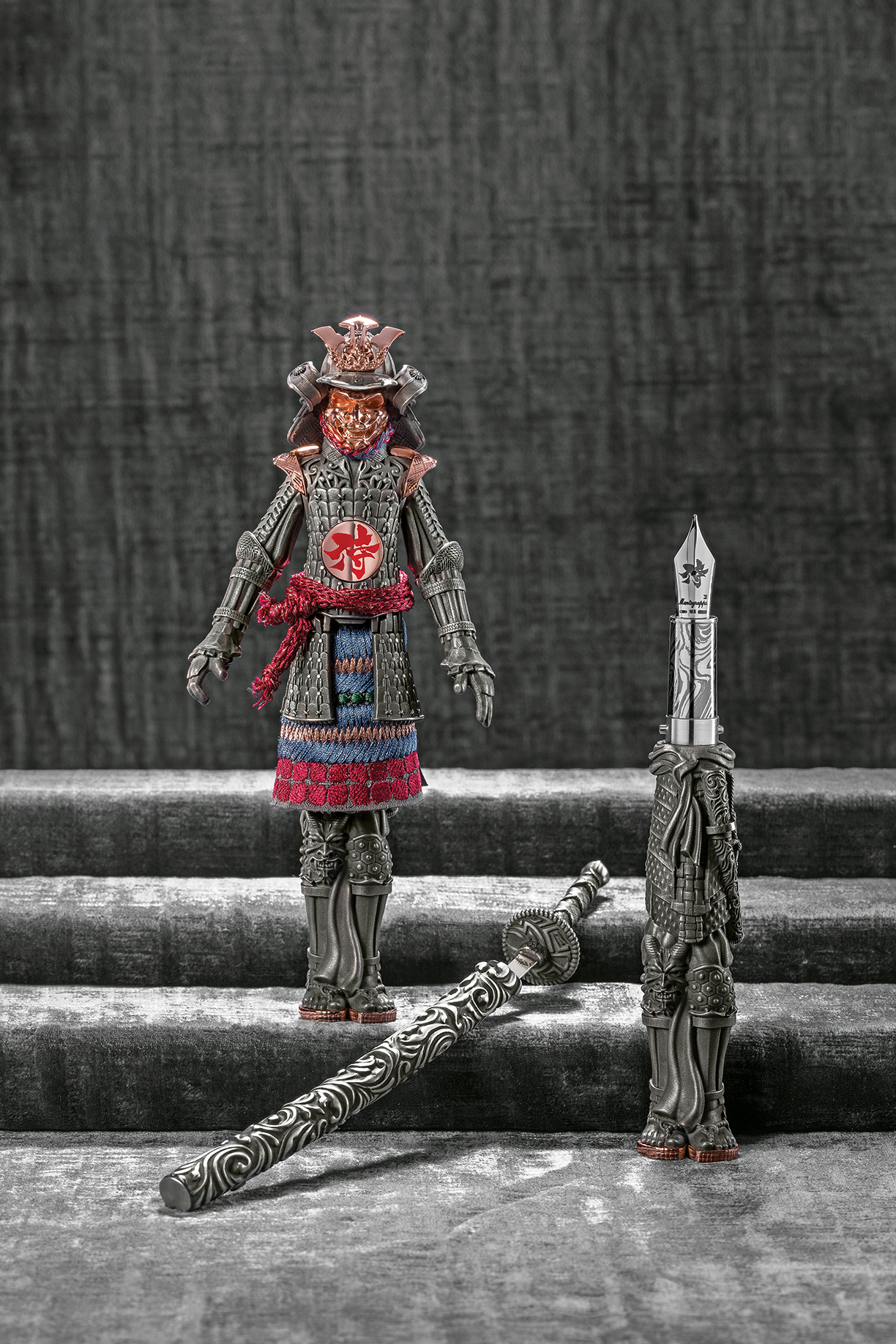 No company on the planet celebrates the pen as an objet d’art as well as Montegrappa, Italy’s oldest manufacturer of fine pens. Last year it released a limited edition Samurai fountain pen ($15,000) that is a wealthy grown-up’s version of a toy soldier. Each of the 177 sterling silver sets (packaged in a black lacquered box) includes an armored warrior, along with a katana sword case that contains a letter opener.

Prices of limited edition luxury pens can be stratospheric, but the $8 million reportedly paid at a Shanghai charity auction has remained a safe record since 2010. Commanding that astonishing figure was the Fulgor Nocturnus from Italian manufacturer Tibaldi (a subsidiary of Montegrappa), copiously embellished with 945 black diamonds and 123 rubies.

Aurora, another venerable Italian pen maker, claims its Diamante fountain pen — whose graceful platinum form is sheathed in 1,919 De Beers diamonds totaling 30 carats — is the most exclusive writing instrument in the world. Almost too exquisite to use, just a single Diamante, priced at more than $1.4 million, is available each year.

Nancy Olson reports many collectors place a premium on the provenance of pens, collecting almost everything produced by a specific brand. Acknowledging pen aficionados’ diverse motivations, she states, “Some use all the pens in their collections and really appreciate the art of writing while others keep their pens in their original boxes, never to see a drop of ink!”

Either way, luxury writing instruments are in no danger of going out of style. “There’s something about a fountain pen that’s majestic,” suggests pen maker David Oscarson.

Some of the world’s finest hotels have accepted hundreds of thousands of new guests: honeybees that reflect a commitment to sustainability.
Read More

A Guide to the Michelin Guide

Bvlgari Hotels & Resorts is proud to announce that both the hotel’s signature restaurants, the Italian Il Ristorante — Niko Romito and the Chinese Bao Li Xuan, have been awarded Michelin stars during the Michelin Guide Shanghai 2020 presentation ceremony.
Read More

The Aspire Princeton Designer Show House showcased elegant and creative designs by interior designers, all with their own design aesthetic.
Read More

An artist’s unconventional way of painting creates spectacular pieces that allow the viewer to experience their own emotion or recall their own memory.
Read More

Subtle or bold, classic or contemporary, shiny or opaque, wallpaper has evolved to be design’s magic wand to fashion an interior that captures creativity.
Read More

Graffiti and street art have earned a place in prestigious collections, private galleries and museums. Click the link to see examples from all over!
Read More

From patterned wallpapers and dark paint to a velvet sofa with a mix of textures pillows, Maximalism calls to be courageous in design and embrace “more."
Read More

John A. Peralta, a self-taught artist based in Austin, Texas, has a unique taste for both science and how things work as well as art.
Read More

The Spirit of Giving

To Ireland With Love

A new color collection from Curator pays homage to the artists of the Emerald Isle.
Read More

In an interview, Nelson De La Nuez discusses the incorporation of images from American pop culture, today’s advertising and high-end branding in his art.
Read More

Custom Gulf-front Home in Casey Key, Florida up for Auction

With 123 feet of private beachfront away from the crowds in Casey Key, Florida, this home offers a place to get away from it all.
Read More

On Unique Homes' first exclusive virtual panel, real estate agents discussed how the real estate markets of America endured (and continue to endure) through the turbulence that the Covid-19 pandemic has caused.
Read More

During the mid-year height of the Covid-19 pandemic, real estate agents comment on how the market stood, and in some cases prevailed, under enormous pressure.
Read More

A Cut Above The Rest

Sustainable jewelry companies weigh the impact of their creations, in more ways than one.
Read More

With three stunning models designed by Arya Properties, Pioneer Estates can be where families can call "home."
Read More

A Peaceful Haven in New Hampshire

Custom-built elegance can be found in this immaculate log home in the desired Tuttlebrook Log Home neighborhood.
Read More

This luxury home has a number of amenities and is in an ideal location, close to New York City and the famous Jersey Shore.
Read More