Made in Italy: 5 Trends in High-End Tiles

We examine five of the latest trends in high-end tiles as showcased recently at the Italian international tile trade fair.

By Katherine Salant
About 10 years ago, the Italian ceramic tile industry took off in an entirely new direction and began to produce tiles that previous generations of tile makers had thought impossible. The new tiles mimicked natural stones like marble so realistically, even experts couldn’t tell the difference until they got up close. This aesthetic leap was almost entirely due to the ingenuity of Italian engineers, who adapted digital technology to tile making machinery.
The obvious next step was replicating other natural materials like wood, and here the illusion was heightened by making tiles the same size as individual wood floor planks and adding texture with wood grain and mineral marks. The tiles also got bigger. Today, 12-by-24-inch and 30-by-30-inch tiles are the norm and ones as large as 5-by-11 feet, with a thickness of only a quarter inch are available.
With all these decorating possibilities, European households began to use tile in all their living spaces, not just the wet areas like the kitchen and baths, a move that is slowly catching on in the U.S. Where is the Italian tile industry today? These trends were spotted at this year’s CERSAIE, a huge international tile trade fair held annually in Bologna.

Two years ago beige and bone, neutral tones that influenced home decorating schemes worldwide for decades, had seemingly been banned from the color pantheon forever and gray was in ascendance. But judging by the exhibits at CERSAIE, beige and bone are coming back. Nearly every exhibitor had something in these colors.

Tiles that look like natural stone and wood are still big sellers, but tile designers are moving on and finding inspiration in completely unexpected places.
Perhaps the most surprising was a nostalgic dive into 1970s American pop culture, sitcoms and Happy Days, once a very popular TV show in Italy as well as in the U.S. Ceramic Vietrese’s Happy Days Collection of 8-by-8-inch, multicolored geometric motifs is based on furnishings in the Cunningham’s house.
Marca Corona 1741’s Bleecker collection celebrates oriented strand board. A staple of residential construction in the U.S. for decades — here it is commonly called OSB — the 4-by-8-foot, plywood-sized sheets are made with waste wood chips and resin. Used for framing, OSB is covered over with finish flooring, siding, and roofing and completely hidden once construction is complete. Few Americans would single it out as worthy of note, but in Europe where OSB is relatively new, it is celebrated for its recycled content, explained Angelica Dallari, a sales manager with Marca Corona 1741. The tile version is available in a variety of sizes including 4-by-8 feet, and offered in six colors, including sage and red maple. As an interior finish, Bleecker achieves a surprising degree of elegance.

Many offerings not only had unusual sources, they also elicited a double take, inviting a viewer to stop for a longer look.
Piemme’s Tartan in its Incipit Collection, designed in collaboration with Valentino Home, includes 12-by-24-inch tiles with a Scottish tartan pattern in colors that would make a Scotsman blush — shades of white, silver, bone and taupe.
Sometimes the double take is slow in coming. At first glance, Kale Italia’s Nami from its Mirai Collection appears to be ordinary black floor boards. But look closer and you see that the edges of the planks are not squared off, they’re wavy (an effect exaggerated in the image at bottom left) with white grout lines that add a cartoonish effect. As explained by Kale Italia’s Project Manager Massimo Ferri, floor boards with wavy edges are common in rural Scandinavia where wood floor planks are cut from tree sections without further squaring. Instead, the planks are rounded off just enough to fit together. The choice of black adds a bit of Asian flair — wood floors in China and Japan are typically this color. 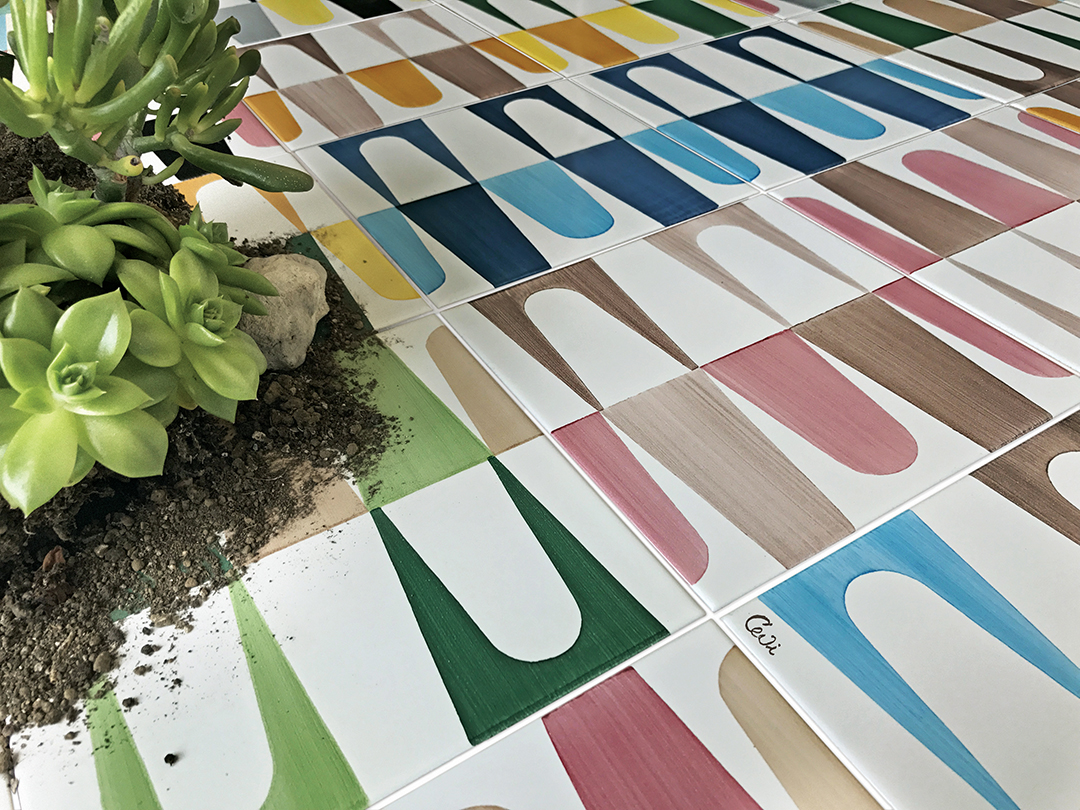 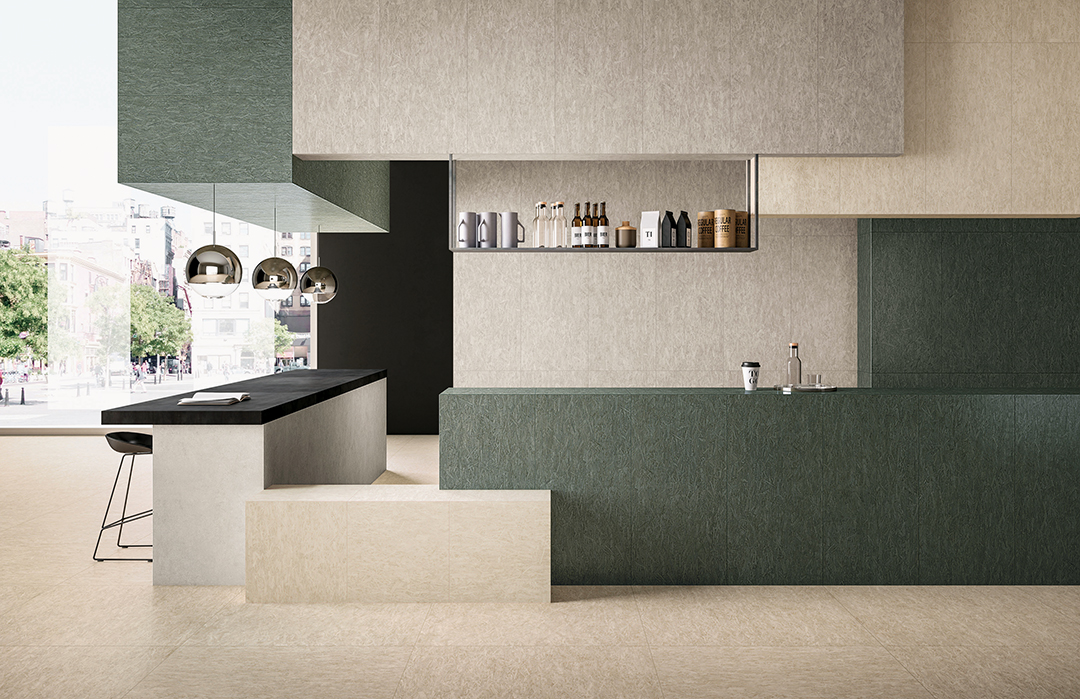 Going beyond mere appearance, many designers seek to create a mood that is often playful. The best example was Piemme’s Fragments Resin Cloud series, created by Pierre Charpin, a French designer known for his imaginative furniture, glassware, lamps, and housewares.
Charpin’s completely unexpected results reveal a light touch. For his tan and bone colored Resin Tan Décor Oblong tiles he created irregular, potato-sized clouds that appear to be marching, sheep-like, in curved and straight formations across a plain background on 24-by-24-inch tiles. The clouds can be darker on a lighter ground or vice verse.
For his Resin Cloud Form tiles of similar size, Charpin’s clouds have varying earth-toned colors and irregular shapes, as if they were cut by hand with scissors. These clouds appear to be floating on a blue gray or charcoal background. The most unusual detail here — when you look closely at the seemingly weightless clouds, you see that they are actually textured stones.

When five of FAP’s 20-by-43-inch Caleido tiles from its Roma Diamond collection are aligned to create a mural that is 100 inches tall, the overall image is striking, with an astonishing degree of visual movement. Pyramidal and rhomboid-shaped objects appear to be projecting forward as they tumble down the wall.
Museum goers and art history buffs will immediately connect this optical illusion and its earth-toned palette to Cubism, a seminal movement in the history of abstract art that was invented by Pablo Picasso and Georges Braque at the beginning of the 20th century. These astute observers would be correct — early Cubism was the inspiration for Caleido’s tile designers, explained FAP’s marketing director Norberto Marzani in an email communication.
Mattia Chini’s large-format tiles (1-by-3 meters) for his family’s Pecchioli firm are equally abstract, but completely different in style and ambience and look like paintings with large areas of soft-edged color. In a telephone interview, Chini said he looks for inspiration in nature and not the work of any particular artist, but many viewers will be reminded of Jackson Pollack’s drip paintings and Monet’s Water Lily Series.
In describing how he achieves his unique look, Chini said he uses the old traditional methods for which his firm is known — powdered glazes applied by hand-sifting them through a screen from above, one color at a time. His method, honed over more than 20 years, gives the colors both a texture and a layered look. Once created, Chini’s tiles do not become a master copy that is mass-produced. Each one is unique.

When you see one of his pieces, you realize that you’re no longer shopping for tiles. You’ve entered the world of art. 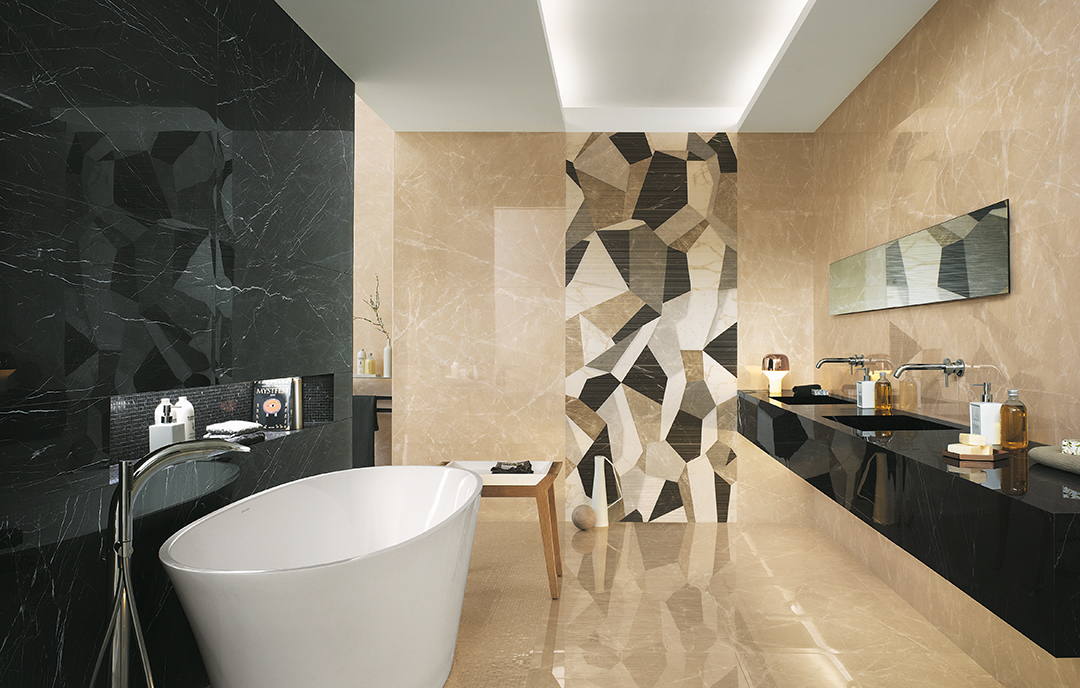