Not too long ago, the possibility of even a $200 million home seemed outrageous. Today the most expensive home for sale in the U.S., dubbed The One, is more than twice that amount. Also off the charts is a square footage almost double that of the White House.

When the first issue of Ultimate Homes debuted in 2005, the most expensive residential property in the U.S. was $75 million. Today, $100 million doesn’t come close to the top 10 for Ultimate. Five properties are priced at $200 million and above, and anything below $138.8 million doesn’t make the cut. More than 50 are above $60 million. “Because we’ve seen so much wealth creation, these numbers don’t frighten many in the ultra world,” says Wright.

“It’s no surprise we are seeing such stratospheric prices today, because worldwide personal wealth is the highest it has ever been. Consider that the world’s population of $10 million-plus households is growing, and fast,” says Stephanie Anton, president of Luxury Portfolio International. More than 1.6 million households claimed a net worth of more than $10 million in 2016, a 91-percent increase since 2010. “If many of the properties on today’s list had come on the market even five years ago, it’s unlikely they would have been priced where they are today,” says Wright.

For potential buyers, lifestyle often justifies cost. “People will pay any price if it’s a prudent purchase. But getting there is a real shock. It takes a little while to figure out what things are worth,” says Gary Gold, executive director of Beverly Hills brokerage Hilton & Hyland. “There are very few people out there making sucker purchases. I don’t care how rich you are, very few want to be a chump.”

For most, getting to the $100 million level is a process that usually begins with a much less costly goal. Often, Gold says, buyers start in the $20-, $30- or $40 million range and discover those homes won’t meet their requirements. “They all buy what they want, the best thing available for their needs. In one of our big sales, the people were originally looking for an $8- or $9 million home. They ended up paying $85 million.”

Prices might be stratospheric, but what matters is often the same as it is for luxury buyers overall. “When they buy a house, they want to feel like they made a smart purchase, whether it’s a great buy or that they beat out somebody else. They want to make an intelligent purchase,” Gold explains.

The argument most often ventured by developers and brokers to justify heady prices is a comparison to the art world. Bruce Makowsky, developer of Billionaire — which at $188 million is No. 6 on our list — takes the analogy to the next level using mega-yachts as a measure. “If these guys are willing to pay hundreds of millions for a yacht that is a depreciating asset they use for four weeks out of the year, what would they be willing to spend for a land yacht?” he hypothesized.

Rayni Williams, also with Hilton & Hyland, is part of the team listing Billionaire. She says the land yacht comparison is appropriate. New mega spec homes are a complete package, taking the idea of turnkey to a new plane by including almost everything someone could want, and then some.

Billionaire is completely furnished, staffed and decked out with unparalleled amenities and features including more than 100 curated art installations, two stocked wine cellars, and a $30 million collection of cars in a custom display gallery along with a helicopter pad and one of very few residential theaters outfitted with Dolby Atmos.

“Spec homes are no longer developed with the intention of appealing to an entire market. With a specific luxury buyer in mind, developers are taking custom building to new heights with over-the-top features — and they’re in demand,” explains Jeff Hyland, president of Hilton & Hyland.

Days before this article went to press, a compound on Carbon Beach in Malibu sold for $110 million, setting a record for L.A. residential properties. The property wasn’t on the market — officially or unofficially — which in the ultra-world is not unusual. “When you have a highly qualified buyer, you tend to knock on doors, whether the house is for sale or not,” says Joyce Rey, executive director Coldwell Banker Global Luxury, whose sales over the years have established price benchmarks for the L.A. market. She says this recent sale is “a good indication of the strength of the luxury market in L.A.”

Another descriptor frequently applied to ultra prices is aspirational. Even though these properties do sell, eventual prices are often substantially less than the initial offering. Still, they set new benchmarks. In recent years, transactions shattering price thresholds include a $147 million East Hampton estate and Copper Beech, a $120 million waterfront property in Greenwich that sold in 2014. In L.A., the $100 million threshold was breached in 2016 with the sale of the former Playboy mansion.

“The sky is the limit. Once we hit the $100 million mark, we broke the glass ceiling — and we’re seeing home buyers comfortable with spending more than that,” says Rick Hilton, chairman and cofounder of Hilton & Hyland.

Continuing this year is a subtle geographic tilt toward California and Los Angeles. “People are showing a willingness to spend in the West. We’ve certainly got global wealth in New York. I think we’ve got a stronger market right now than they do in New York. Anyone who is making a lifestyle decision is going to be looking at Southern California,” says Wright.

Ultra properties built on speculation get the most media attention (who can resist writing about a candy wall or jellyfish room, one of the amenities of The One), but what sells depends on availability and the mix of buyers at a given time. “There happens to be a lot of spec homes out there at the moment. People are building these amazing houses, so they happen to be available. And they’re trading. These houses weren’t available in 2016 to the same degree,” says Gold.

Still, land and location convey the most value and the top 10 always reflect a mix of locations and property types. Gemini in Manalapan, Florida, extends from the ocean to the Intracoastal Waterway. Chartwell in Bel Air is a legendary estate with historical ties. Built in 1933 by architect Sumner Spaulding and restored by Henri Samuel, whose work includes estates owned by the Vanderbilts and the Rothschilds, Chartwell occupies 10.3 acres and is often described as the “the crown jewel of Bel Air.”

Views top the list of ultra attributes buyers consider most essential. Chartwell offers sweeping panoramas of the Pacific and downtown L.A., as do others including The One and Billionaire.

In New York City, dynamic views are part of the value equation for ultra properties. This year, only one Manhattan property finds a place among the top. Occupying four floors in the Robert Stern-designed 220 Central Park South, the residence easily could be considered the Ultimate penthouse. The $250 million price is a record for Manhattan and few other residences have been as large.

Property sizes range from just over an acre to 65,000 acres on Mesa Vista ranch in the northeast corner of the Texas panhandles. Like many Ultimate properties over the years, this ranch has been a labor of love, husbanded over most of a lifetime. “When I began assembling the ranch 46 years ago, I initiated a multi-decade program to help the land heal and over time invested millions on wildlife management,” explains owner T. Boone Pickens. Improvements also included 20 lakes over the course of 20 miles. In addition to a 12,000-square-foot main lodge, the property includes a 33,000-square-foot lodge and several other houses, plus housing for staff. The chapel, a site for both weddings and funerals, is stunning, and a 6,000-foot runway and hangar facilitate getting there. The ranch is priced at $250 million and, according to Pickens, much of the proceeds from the sale will be directed to his foundation. The property is offered jointly by Hall and Hall, and Chas. S. Middleton and Son.

A 60-acre estate in Bridgehampton, once placed at the top of the first Ultimate list, and one-of-a-kind properties continue to be a Hamptons’ hallmark. In 2014, an 18-acre property in East Hampton sold for $147 million, setting a record for the U.S. Many of these properties offer what many consider an idyllic mix — classic estate homes and a substantial amount of land, including frontage on the ocean or a pond and the provenance. The setting for Meadow Lane in Southampton, listed by Harald Grant with Sotheby’s International, is considered a trophy location. It offers 360-degree views and extensive frontage on the Atlantic across three lots, as well as an additional bay-front lot.

Commissioned and owned by the Ford family, Jule Pond offers the largest ocean frontage in the Hamptons with nearly a quarter of a mile on the water. Listed at $175 million, it is the most expensive property for sale in the Hamptons and No. 7 on our list. A complete renovation in 2008 preserved many original features, including molded ceilings with traditional chandeliers, Italian marble fireplaces, French parquet floors and antique bathroom fixtures.

As always, the question hovering over the market remains what will sell next and what will be the next stratospheric price?

Where are they now?
A look at what happened to the top of last year’s Ultimate Homes list.

This article orginally apeared in the 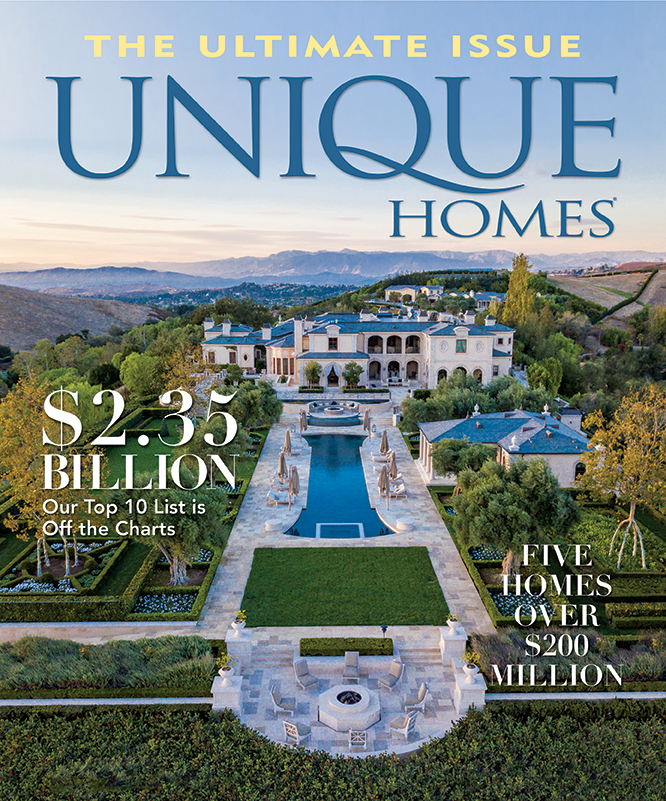