Whether you’re hosting a clambake on Nantucket, enjoying a procession of edible jewels at a Tokyo sushi bar or simply shopping for a suburban supper, the days of consuming seafood with careless abandon are gone. The oceans are desperately overfished, and seafood lovers must be conscious of their own personal impact on the aquatic environment.

The best known resource for both suppliers and consumers is Seafood Watch, a program created by the Monterey Bay Aquarium in Northern California 20 years ago. Its regional consumer guides, identifying the most sustainable and most threatened species, are valued by consumers, chefs and eco-conscious corporations. “We use a rigorous, scientifically-based standard to come up with recommendations, result-ing in the most up-to-date, credible information,” states Maddie Southard, content manager for Seafood Watch.

So influential are these guides—60 million have been distributed to date—that when a particular item moves from the red (“Avoid”) category to yellow (“Good Alternatives”) or green (“Best Choices”), millions of dollars can change hands. Reflecting the thoroughness of Seafood Watch’s recommendations, flounder appears four times as a “Best Choice,” 14 times as a “Good Alternative” and 18 times in the “Avoid” column depending on the exact species, geographic origin and methods of fishing or farming employed. 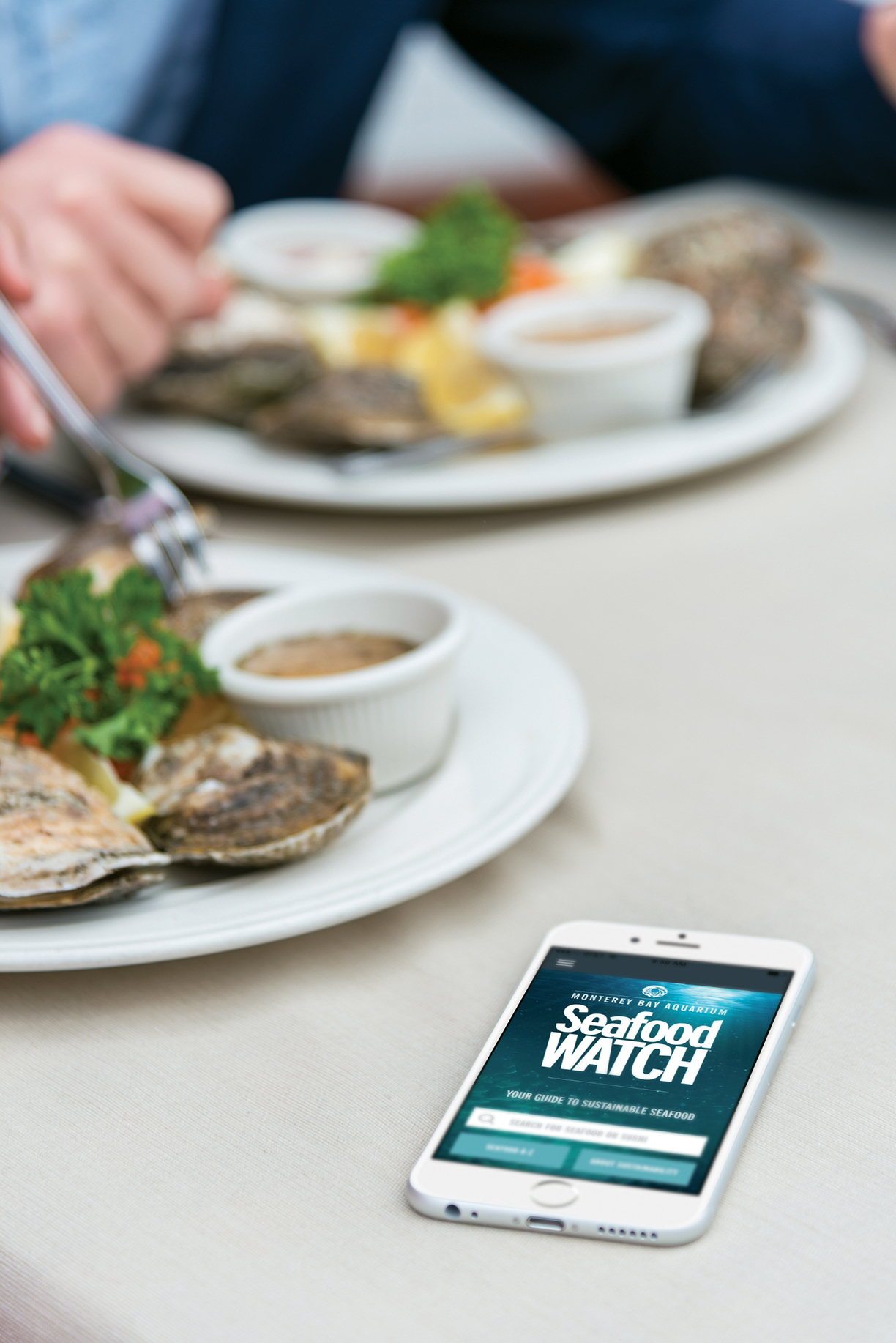 In its early days, businesses viewed Seafood Watch as a fringe movement but today participation is embraced and display of the organization’s yellowfin tuna logo can be a marketing asset. A Blue Ribbon Task Force, comprised of honored culinary authorities, enhances Seafood Watch’s relevance with diners. “The public admires chefs and culinarians, and we realized the impact they have on consumers,” offers Southard, who adds, “Chefs were some of the earliest supporters of the movement so this was a natural partnership.”

“Whenever I’m making decisions about what to put on a menu, I always ask myself, ‘What would Sheila do,’” says Los Angeles chef Michael Cimarusti, referring to Seafood Watch’s Sheila Bowman, who oversees outreach to chefs. Cimarusti, who has earned two Michelin stars at his flag-ship restaurant Providence, became conscious of sustainable sourcing issues as a young chef in L.A. 20 years ago, when a Gourmet magazine review admonished him for serving bluefin tuna.

“As I learned more about issues relating to sustainability, I became really passion-ate about it and wanted to become more active in the movement,” explains Cimarusti. “I was honored to be asked to sit on the Task Force and have learned a tremendous amount from Seafood Watch,” says the chef, who shares all of the program’s recommendation alerts with his staff.

Éric Ripert, chef/partner of New York’s Le Bernardin, takes sustainability as seriously as Cimarusti. “I spend my days with many varieties of fish, considering which are best for the restaurant, he says. Ripert explains, “This means more than just judging by flavor and composition, but includes the ethics and politics surrounding how they’ve been made available to us.” The Michelin three-star chef cautions, “If we don’t support the artisanal way of catching fish, it’s going to disappear.” Hugh Acheson, author and James Beard Award-winning chef with a family of Georgia restaurants, also sits on Seafood Watch’s advisory board and is a strong advocate for local, sustainable ingredients. He recalls that in the 1990s chefs addressed a severe threat to swordfish through a voluntary ban and use of more sustainable alternatives, allowing stocks to replenish. “It made me realize how much clout we have, as chefs, to mandate change when we act as a plurality,” states Acheson.

“I think Seafood Watch has succeeded in being a valuable resource for consumers, chefs, wholesalers, and grocery stores,” says the Canadian-born chef who has helped reimagine Southern cuisine. Acheson, who notes that swordfish continues to face challenges, suggests Seafood Watch would have been an invaluable resource decades ago, when many chefs were oblivious to sustainability issues.

An affinity for bluefin tuna (maguro) and eel (unagi), both largely on Seafood Watch’s “Avoid” list, and adherence to centuries-old traditions makes sushi chefs among the most reluctant to adopt sustainable practices. One sushi chef committed to sustainability is Bun Lai, chef/owner of Miya’s Sushi in New Haven, Connecticut and another member of Seafood Watch’s Blue Ribbon Task Force. Some odd ingredients—every-thing from insects and invasive species to edible weeds—populate his voluminous menu, and the James Beard Award nominee relies on guidance from Seafood Watch. 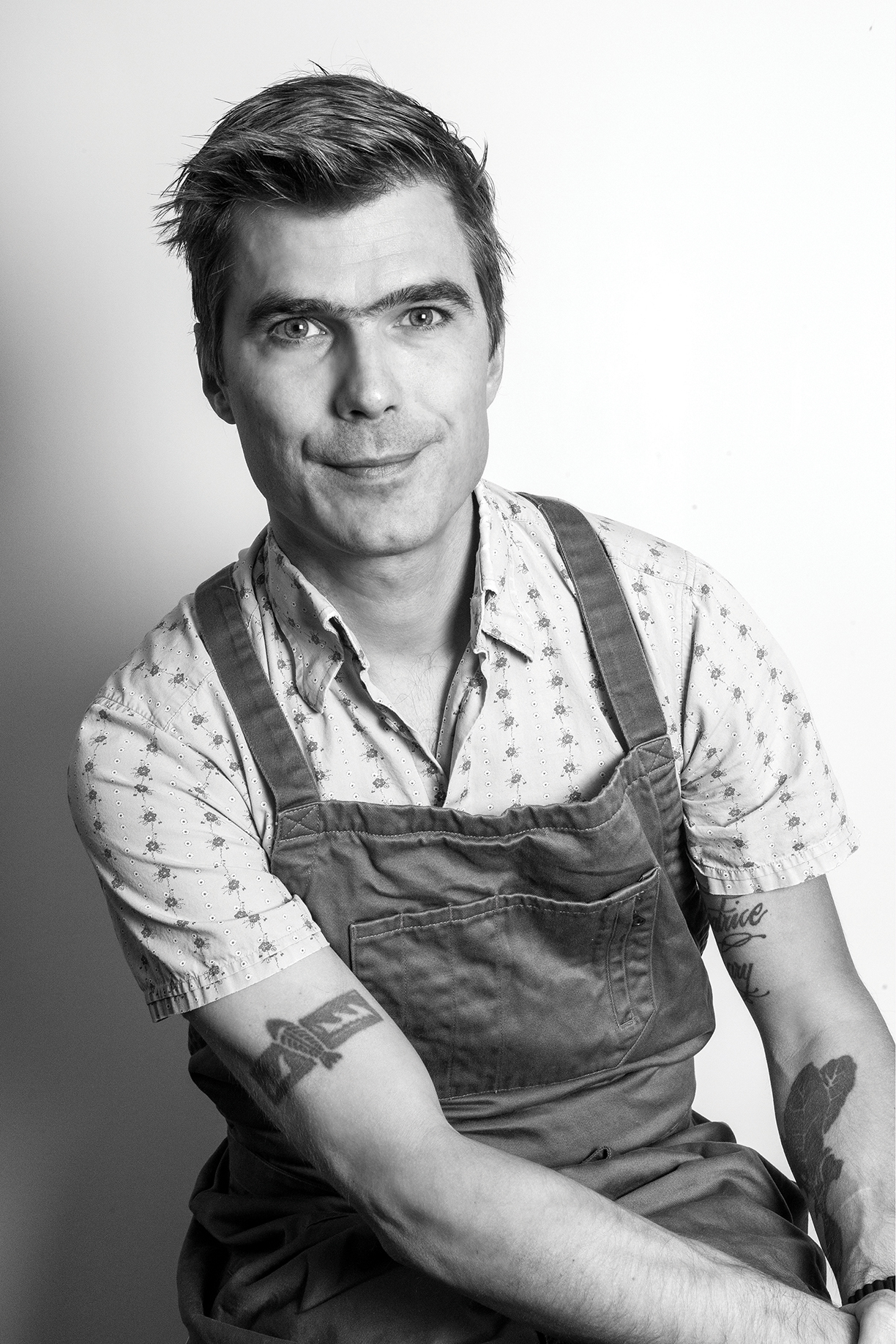 “Miya’s started working on sustainable seafood very gradually in the early 2000s,” reports Lai, explaining that unreliable data made conscientious sourcing challenging. “Monterey Bay Aquarium’s Seafood Watch changed all of that by creating a tool that helped people choose sustainable seafood in a market awash with imported seafood of mostly dubious origin and quality,” says Lai. “When I first discovered Seafood Watch, it was as if a light beamed into the darkness I was surrounded by,” he says. “I admire my heritage, but we must question our traditions, too,” states Lai, acknowledging sushi’s popularity contributes to overfishing around the globe. He cites Jiro Ono, the revered sushi master featured in the documentary film Jiro Dreams of Sushi, who lamented the demise of the majestic bluefin while continuing to serve it to customers.

“There are, however, sushi chefs filled with a passion for sustainable seafood like those café owners who pioneered fair trade coffee decades ago,” says Lai with optimism. With Seafood Watch’s guides and app available to chefs and consumers alike, good choices can be made on both sides of the bar. 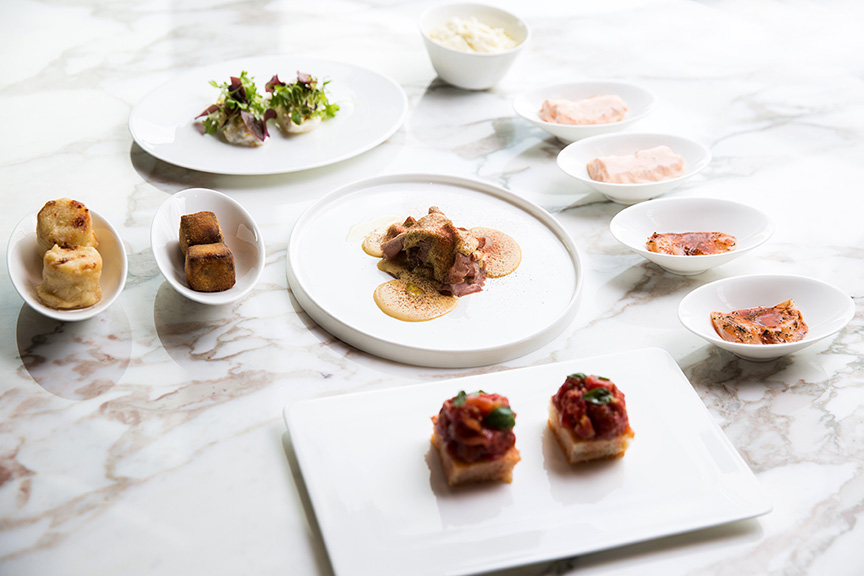 The Michelin Guide began when the tire company — Michelin Tires — wanted to encourage travelers to drive to their destinations, in turn boosting car and tire sales. This helpful guide offered maps, attractions, and briefly mentioned places to stay and eat. The publication began as a travel guide to encourage day trips and now covers a range of prestigious ventures such as the flavor and personality of dishes at restaurants. Today, the coveted Michelin stars are awarded to the very best of the best restaurants.

According to The International Culinary Center, US-based restaurants only became eligible for Michelin stars in 2005, and the list continues to grow. The ratings range from one to three and rank the most sophisticated and successful restaurants around the world.

Bvlgari Hotels & Resorts is proud to announce that both the hotel’s signature restaurants, the Italian Il Ristorante — Niko Romito and the Chinese Bao Li Xuan, have been awarded Michelin stars during the Michelin Guide Shanghai 2020 presentation ceremony. Il Ristorante — Niko Romito represents a unique collaboration between Bvlgari Hotels & Resorts and the renowned Italian chef-patron of 3 Michelin star restaurant Reale in Abruzzo. Showcasing a new gastronomic concept that the chef specially designed for Bvlgari Hotels & Resorts, Il Ristorante — Niko Romito is currently present in the Bvlgari properties of Dubai, Beijing, Shanghai, and Milan. Niko Romito is one of very few Michelin-awarded chefs in Italy to receive this prestigious acknowledgment by the Michelin Guide both in his home country and internationally. Other Michelin Rated Restaurants To Try

Crust (Phuket, Thailand) — A cozy setting for Italian classics, such as scallops with truffle risotto and tiramisu.